The aso, which is a mythical animal that is a hybrid dog, as well as a dragon, functioned as a protective image against malevolent spirits. This animal was also commonly used not just in tattoo art, but on shields, baby carriers, and houses as well.

The Dayak people, also spelled Dyak, Dutch Dajak, are the native people of Borneo, which is an island that is part of the Malay Archipelago, situated southwest of the Philippines, somewhere near Indonesia. It is actually a loose term for over 200 riverine, as well as hill-dwelling ethnic subgroups, which location is principally in the central and southern interior of Borneo, each of them with its own dialect, customs, laws, as well as territory and culture, even though common distinguishing traits are readily identifiable. 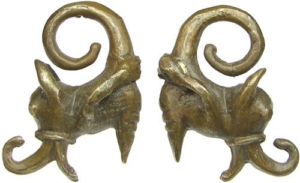 Historically, these riverine people lived mostly in longhouse communities, seldom with more than several hundred members, and they traced their descent through both the male, as well as the female lines. The basic unit for them was the family, and children remained with their parents until they got married. Notwithstanding the lack of unity between groups closely related in language, as well as customs and marriage, a boy often sought his bride outside of his own village and went to live in her community.

The native people of the Heart of Borneo are frequently known as Dayak. The term was coined by Europeans, and it actually refers to the non-Malay and non-Muslim inhabitants of central, as well as southern Borneo.

The Dayaks are peace-loving people who live based on customary rules or adat asal which govern each of their main activities. In the past, the highly developed, as well as complex religious practices of the Dayak peoples involved numerous local spirits and omen animals. As with tattooing techniques found throughout Polynesia, the tattooing techniques in Borneo are likely also of great antiquity.