Home
Blog
Cave Paintings Of The World: Which Are the Most Common Subjects Among Them?

The time of the Upper Paleolithic period was just before the end of the last ice age in Europe (15,000 to 10,000 B.C.E.). Human beings lived in small bands, hunting migratory animals, as well as creating some of the most spectacular cave paintings which are known to exist.

The most surviving examples were found in France and Spain. The simplest figures are only outlined drawings, but the majority of them combine this technique with sophisticated shading and color washes, which suggest the differing textures of pelts, horn, as well as bone.

Cave painting is a type of parietal art, in the category of which are also included petroglyphs or engravings, which can often be found on the wall or ceilings of caves. The term often implies prehistoric origin, but cave paintings can also be of recent production. Usually, cave paintings were interpreted as hunting magic to increase the abundance of prey. 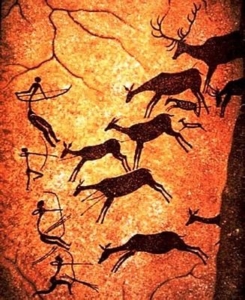 Another theory says that cave paintings were made by Paleolithic shamans. The shaman had the habit of retreating into the darkness of the caves, entering into a trance state, and paint images of his or her vision, maybe with some notion of getting the much-needed power from the cave walls.

Some of the most common subjects in cave paintings are large wild animals like the bison, horses, aurochs, as well as deer, and tracings of human hands, together with some abstract patterns, which are called finger flutings. The species which were most often found were suitable for hunting by humans but were not necessarily the actual typical prey, which is found in associated deposits of bones.

We may never know exactly by whom and why these ancient tattoo imagers have been created or their meanings in general. A lot of people think that they may have had a function for rituals. However, they resonate in tattoo art as something primal, a connection to a past which, although distant in time, seems vibrantly present in the masterful images which are left for us.