Generally, tattoos symbolize a specific meaning. Animal tattoos are excellent tattoos to get if you want your tattoo to hold a specific and profound meaning. Each animal conveys something different. They are not gendered specific, and they may be imprinted on any body part. Animal tattoos are very adorable, and one such example of a tattoo is the deer tattoo. A deer is a naturally amazing animal that looks great in appearance. The animals that have some fantastic characteristics are usually applied to symbolize several different meanings.

Since there are different types of deer, the meaning is going to range from one design to another. 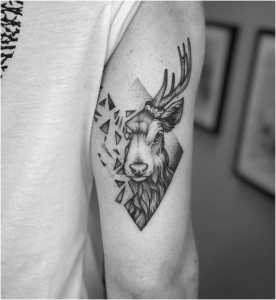 Cave drawings of deer, elk, or other large forest animals were around since Neanderthals still roamed the Earth. The Native American tribes spend much of their time studying the behavior of these animals, trying to understand the world around them. Soon, these graceful creatures were given an elevated status in Native history and legend.

Spring may only return to the land after the Horned God is resurrected and impregnates the Mother Goddess, named Brighid. Unluckily, Christians see the Horned God as Satan as of his prominent antlers, which is an association that stems from the early days of Christianity of the British Isles.

Although modern Western culture may find the deer a somewhat benign, peaceful, as well as bland animal, it was charged with much symbolism in the past. In Mayan hieroglyphs, for example, this has been a symbol of drought. Among the Aztecs, the mother of the twin heroes was sometimes depicted as two-headed deer, and deer were also seen as carrying the sun.

Among the people of central Asia, the deer was a conductor of souls, and also in Celtic culture and among the indigenous people in Colombia. In a lot of different cultures, the robes of shamans were also made from deerskin, and it was not uncommon for shamans to wear antlers on their heads.

Although this tattoo can appear in different designs and styles, it is usually going to contain some specific meaning. The tattoo may be applied to symbolize motherhood, for example. The reason for this is as the deer are commonly connected with good parenting.

Tattoos of deer almost always include antlers, which often occur on the stags, or males, of the species, but not always, which depends on the particular type of deer. Western tattoos capitalize on poses that show these animals as representative of wildlife and nature, but also of independence.

Does and stags represent different elements. An image of a dose is closely related to gentleness, motherhood, and kindness, while a stag is a virile, lustful, as well as fertile animal.

Generally, these creatures have some of the following meanings in tattoo art:

In most of the cases, you are going to find the deer mother looking around, while the calf feeds on the grass. This type of tattoo is mostly going to be applied to symbolize motherhood.

Deer are quite gentle, and because of that, they could also be applied to symbolize gentleness or kindness. This is because of their natural character. They can symbolize nobility, which is a very vital value.

There are some other types, such as stag, which we already mentioned, which is somewhat different from the kind type. These types are going to symbolize lust, fertility, and virility. This type is going to mostly be applied by men, as it often has the manly characteristics. These are going to have the horns, which appear like the twigs of a tree.

Regardless of the fact if you want an image of a doe-eyed deer or a strong slag, any tattoo design may be made that embodies unique and beautiful traits that you identify with. Some popular deer tattoo variations include tribal deer tattoos, deer antler, and also deer skull tattoos.

Sometimes, it may be hard to decide which tattoo design to choose. There may be numerous questions running through your head, such as what your new tattoo is going to symbolize or where you are going to place it on your skin and so on. Regardless of what your type of tattoo is, you will want to ensure that you choose the right one. If you are sensitive to symbolism, make sure that you understand the meaning before you apply it.

The most important thing would be to note that the best tattoo is the one which you most readily identify with.