Home
Blog
Lale Sokolov, The Tattooist Of Auschwitz And His Secret Love Story

Ludwig or better known as Lale Sokolov, was an Austro-Hungarian born Slovak-Australian businessman and Holocaust survivor. He was Jewish, and he was part of the first transport of Jewish prisoners to Auschwitz in 1942. When he arrived, he was tattooed with the number 32407.

Lale Sokolov was born in 1916, on the 28th of October, in Korompa, Kingdom of Hungary and now Krompachy, Slovakia. His work was to construct housing blocks for the expanding camp, but soon after that, he became ill with the thyroid. When he recovered, he became the assistant of Pepan. Still, after his disappearance, Lale became the main tattooer or tattooist of the camp, partly because of his language skills – he knew Slovakian, German, Russian,  as well as French, Hungarian and a bit of Polish Getting this job meant that he was one step further from death than the rest of the prisoners. He also received many benefits like a single room, extra rations, as well as some free time when his work was completed. 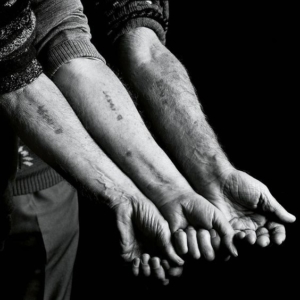 For the German commandants at Auschwitz, Lale Sokolov was just a compliant Jew easily manipulated to do their dirty work. For recent arrivals, Lale was a stolid man who would not make eye contact as he tattooed numbers onto their forearms. However, for the concentration camp’s incarcerated population, he was the savior that shared some extra rations, and altered prisoners’ tattoos to keep them from the gas chamber, as well as helped doomed men pull off daredevil escapes.

In 1942, when Pepan was still alive, Lale Sokolov was handed another piece of paper, and in front of his eyes were five digits: 3 4 9 0 2. Tattooing men was one thing for him, but when he was supposed to hold the thin arm of a young girl in his hands, he felt terrible. So, one day, Pepan urged him to do as he told, and if not, he will condemn himself to death. He was forced to tattoo the arm of a girl – there was something about this girl and her bright eyes.

Years later, Lale said that at the moment when he tattooed the number on her arm, she tattooed her number in his heart. He discovered that her name was Gita Fuhrmannova, coming from the women’s camp Birkenau, and he knew that she would never love another. Also, the feeling was mutual. He had used his relatively privileged position to keep this woman alive by sending her extra food and messages through his guard. He even moved her to a better workstation. He tried to give her some hope.

Lale also used his privileges to feed his former block-mates, Gita’s friends, and the Roma families that arrived later on. He also started trading jewelry and money with the villagers working near the camp, in order to obtain more food and provisions for those that need it the most.

In 1945, the Nazis started shipping prisoners out of the death camp before the Russians arrived. Gita was one of those women. Lale knew only her name and nothing else. He also escaped the concentration camp and returned to his native place, which was then part of Czechoslovakia. Then, he went to Bratislava, which was the main entry point for returning survivors, to search for her.  After weeks of searching, she stepped out into the street in front of his horse. They married the same year, and Lale changed his surname, which was previously Eisenberg to Sokolov.

After his wife died in 2003, he finally felt able to talk about his war-time experience. Heather Morris interviewed him over the next three years, and after that, she wrote a book about his life, titled “The Tattooist of Auschwitz,” published in 2018.

“He would be amazed and thrilled to know that his story is being told. He always wanted everyone to know about his falling in love with the most beautiful girl in the world.”