Ludwig van Beethoven was a German composer and pianist, born on the 17th December 1770 and died on 26th March 1827. Beethoven was an important figure in the shift between the Classical and the Romantic eras in Classical music, and he is still one of the most recognized, as well as influential of all composers. Some of his best-known compositions include nine symphonies, five piano concertos, one violin concerto, 32 piano sonatas, 16 string quartets, his great Mass, the Missa Solemnis, as well as one opera, Fidelio. 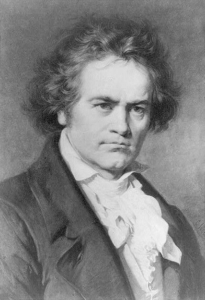 Beethoven was born in Bonn, which is the capital of the Electorate of Cologne, as well as part of the Holy Roman Empire. He demonstrated his musical talents at an early age, and he was taught by his father, named Johann van Beethoven. At the age of 21, he moved to Vienna, where he started studying composition with Joseph Haydn and also got a reputation as a virtuoso pianist. He lived there until his death. By his late 20s, his hearing started declining, and by the last ten years of his life, he was nearly deaf. In 1811 he decided to give up conducting, as well as performing in public but continued to compose; a lot of his most admired works come from these last 15 years of his life.

Even though many portrait tattoos are modern musicians, Ludwig van Beethoven is also used as a subject in tattoo art. As he was one of the foremost and most famous composers and virtuoso pianists of his day, he is still arguably considered by some the greatest composer that has ever lived.

Tragically, as we already mentioned, experiencing deafness as early as 1801 made him give up performing and conducting in public. For the last 15 years of his life, he went deaf, but he still composed nearly until the end.

The story of Ludwig van Beethoven, as well as his symbolism, is one of personal triumph over misfortunate, in addition to one of supreme musical achievement.