Music is universal. People around the world consider it a daily part of their lives. It’s tough to find someone who dislikes music. Music is concerned with how a person is able to express their emotions to everyone around them, without speaking out loud. Some people use music in order to talk about things. It keeps you company when you’re lonely and makes you smile when you’re feeling sad. If you don’t know how to discuss your feelings about something or someone, you can do so through music. Music and musical instruments like the violin are recognized as the number one source of expressions, and finding inspiration in anything.

There are times when people who like music so much end up getting music tattoos on their bodies as a symbol of their love. When it comes to tattoo design, music is a prevalent theme. These tattoo designs can come in the form of notes, symbols, lyrics, or even a picture or name of their favorite artists. Others decide to get a tattoo of their ideal musical instrument. A music tattoo is an excellent choice for those who enjoy both.

Music tattoos carry their very own meaning. And as mentioned before, music is one of the best ways to express one’s self without saying something out loud.

Not only is the music tattoo appreciated by music fans, but musicians themselves can get a tattoo as well. Guitars and violins are considered as the most common musical instruments for a tattoo design. People who decide to ink their bodies with instrument tattoos could probably play that kind of instrument themselves, and want to bring their favorite instrument with them wherever they go. 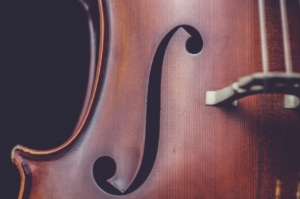 You can get any type of instrument tattoo on your body like the keyboards, drums, the microphone accompanied by musical notes, or even something unconventional, like the accordion or the bagpipes. Some people get tattoos of a person playing a musical instrument.

The violin has been in existence since ancient times, with a symbolism that predates its contemporary associations with mere chamber music. Because they are often associated with heaven or the angelic, violins have been featured throughout folklore, literature, and mythic tales for hundreds of years. Violin strings are often compared with the strings of the human soul.

In European culture, the violin is considered to be a symbol of man’s belonging to the world of art, music. For this tattoo with a high probability, it is possible to determine a creative person.

If you move away from the musical context, the violin represents a symbol of human vulnerability and his complicated relationship with the environment. Violin strings are sometimes described as a string of soul that responds to the tone given by the outside world.

Tattoo designs that include the violin image are often done in the style of the steam- park and represent a symbol of a tender, vulnerable soul, which is hidden under a rough and sometimes aggressive shell. In most of the cases, tattoos depicting violin are chosen by women since it symbolizes several things like the fragility, vulnerability, and graceful beauty. However, this doesn’t mean that the violin tattoo is something that men cannot wear.

These days, tattooing is considered as a pure art form since it is used to personalize, highlight people in the crowd, and also can carry a deeper meaning or idea. The violin tattoos are widespread among creative people, and of course, musicians. This tattoo can be seen on many of the famous and well-known performers as well as composers. But in this area, the violin tattoo as a very different meaning.

The violin tattoo can be combined with other elements for a more beautiful and unique design. For instance, the violin is often depicted with a bow, flowers, or notes. Musical instruments may be part of the composition and portrayed in human hands as if he were playing the violin. The violin sound holes are a trendy choice for a tattoo design, especially among women, since they carry a special meaning. The image of black violin sound holes, which look like long, curved, and opposing “f” s, tattooed low on a woman’s back is a direct reference to a well-known photograph by Man Ray (1890-1976), a surrealist photographer who created Violon d’Ingres in 1924. While criticizing the notion that women are art, he also manages to show that this might be so.

The ideal placement of a Violin Tattoo:

Creating a good tattoo isn’t just about the design, but sometimes, its placement on the human body can make it look great too. There are times when the installation of a tattoo on the right body part makes the whole thing funny, or even poignant. When you’re still deciding whether to get a tattoo, you might have already decided which design to get, and which spot to place it in. The area where you put in your tattoo could be of importance as well. Tattoo designs with the violin are most often inked on the back, the legs, the back or side of the back, the arms, and the chest.