The eagle warriors, or also known as the eagle knights, were a group of elite infantrymen in the army of the Aztec Empire. Those that belonged to this warrior society were either members of the nobility or commoners that had distinguished themselves on the battlefield.

In Aztec mythology, these birds were regarded as a symbol of the Sun. Hence the eagle knights were the warriors of the Sun. The members of the warrior society dressed like eagles, adorning themselves with feathers and wearing headgear with an eagle on it. This headgear also had an open beak which permitted the warrior to a lookout. Some images of these warriors can be seen in certain artifacts, as well as features, most notably in statues made by the Aztecs and in pictures found inside codices made by the Spanish. 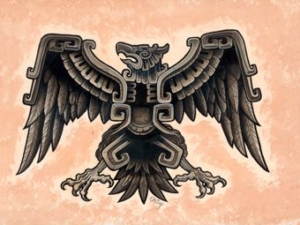 Much of Aztec like revolved around war, the taking of captives, as well as sacrifices of those captives to the gods, so that they will achieve the perpetuation of the universe. But, the social rank of the Aztec warrior caste was very explicit, as well as socially recognizable. An Aztec warrior could wear feather headdresses and leather bracelets, only when he had captured prisoners.

The entry into these elite military orders was no easy feat; an Aztec warrior, noble or otherwise, would still have to prove themselves worthy before they would be accepted to the ranks of the cuauhtlocelotl. Because of the militaristic nature of the Aztec society, of course, the feats were war focused.

At the end of his career, an Aztec warrior could attain one of the two upper military orders: that of the “jaguar-knight,” whose war costume was a jaguar skin and that of the “eagle-knight” whose helmet was an eagle head.

The Aztec eagle warrior, or better known as the cuacuauhtin in classical Nahuatl, was as we know a revered order or class of warrior in the Aztec military. Adorned in feathers, with clothing and shrouds for the head, what mimics the visage of their namesake, these warriors were surely remarkable figures.

That’s why in tattoo art, we can most often see the proud eagle-knight depicted.