Home
Blog
The Famous Aztec Calendar Stone: What Is Its Exact Purpose and Meaning?

The Aztec calendar stone is a combination of a number of different symbols, with different meanings and it is also known as glyphs. The actual Calendar Stone was carved at the time of the reign of the sixth Aztec monarch in 1479. This Aztec calendar was dedicated to the deity Tonatiuh, or the Sun, whose face is placed in the middle of the calendar, which appears inside the glyph for “movement.”

There are four square panels that surround the Tonatiuh, honoring the previous incarnations of the deity which represents the four previous ages of the world. Circumscribing these are the glyphs that represent the twenty days that the Aztec month had. The central panel represents the date “4 Ollin”, Ollin meaning movement, a day on which the Aztecs anticipated that their current world is going to be destroyed by earthquakes. Additionally, it also holds the dates of previous holocausts: 4 Tiger, 4 Wind, 4 Rain, and 4 Water. 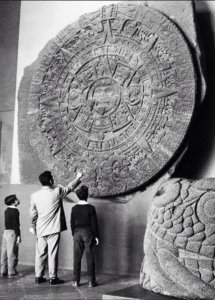 The calendar stone was uncovered in Mexico City in 1970, and it measures almost twelve feet in diameter and weighs some twenty-five tons. It was carved from basalt, which is solidified lava, this being an area where volcanoes were a common thing. But, after that, it was lost – buried under the central square of Mexico City, for more than 300 years.

The famous calendar stone is actually a brilliant combination of artistry and geometry. It reflects the Aztec understanding of the time, as well as space as wheels within wheels. The detailed surface of the stone also combines the understanding of the gods which the people had created over the centuries and their observations of the heavens.

The exact purpose, as well as the meaning of the Calendar Stone, is still not clear. Archaeologists, together with historians have proposed a lot of theories, and it is likely that there are several aspects to its interpretation.

The earliest interpretations of the stone actually relate to its use as a calendar. Some of the circles of glyphs are for the days of the month. The four symbols that are included in the Ollin glyph represent the four past suns which the Mexica considered the Earth had passed through.