What probably inspired a lot of people to get birds tattoos are envy and jealousy, and all that because birds can fly and they cannot. Yes, they can fly, and after all, who doesn’t fantasize about flying? Ask most people what superhuman talent they would like to have, and they will answer flying. Getting a bird tattoo on your arm, for example, an eagle is as close as you are ever going to have feathers, but still, it is pretty cool. However, what exactly bird tattoos symbolize?

Birds can symbolize higher understanding, as well as spirituality, or also communion with other realities and world. They can also represent freedom, physical ability, mental autonomy, and spiritual self-direction.

A bird can flit from the ground to the sky, so it signifies connection, as it connects us with not just the earth but the entire Universe. Birds can also symbolize independence, self-sufficiency, as well as the power of self-direction and self-actualization. They can even symbolize lightness, agility, facility, as well as the ability to rise above adversity. Birds are fearless, and they encourage us to move beyond our zone of comfort and dare to go higher and further. They encourage us to learn more, do more, and be more.

Here, we are going to talk precisely about one bird, which is commonly used in tattoo art, and that is the eagle. 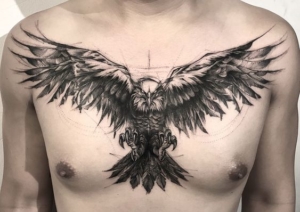 The eagle is considered to be the kind of birds. The symbolic theme of power is quite common among eagles, as well as with eagle tattoo ideas. In almost every culture and philosophy in the world, this bird is a magnificent creature of purity, a powerful force, and beauty.

Some Native American Indian tribes of North American viewed the eagle as the Thunderbird and deemed it a messenger of the heavens. In symbolism, written or pictorial, the eagle is the representative of the mightiest rulers, the highest gods, and the greatest heroes. In some surviving texts from ancient Babylon, the deceased king is borne to the heavens by an eagle.

In a lot of examples, the eagle embodies lofty aspirations and higher spiritual achievement. In some other cases, it is the symbol of strength and glory, and it even substitutes for the Sun in the Arctic and some Native American mythology.

As they are also birds of prey, they have come to be connected with the clarity of vision and thus, insight as well. Being adopted as the national bird of the United States in 1782, the American or also called bald eagle has also become part of tattoo art, is the most popular and patriotic tattoos done in the country.

Soaring up in the skies, the eagle would settle in trees and the ground in order to deliver significant messages to humanity from the spirits of the skies and the winds. In reality, these birds are the master of air – and, their vision is also remarkably accurate, which symbols having clear vision ourselves.

It is impossible to capture the multitude of meanings that eagles have acquired, and it is equally impossible to describe the great range of expressions that they inspired in tattoo art.

If you are determined to a commitment of clear focus, personal transparency, as well as spiritual clarity, this tattoo will be a proper choice for you.

This bird is somewhat a masculine bird, but, of course, it does not mean that only men can wear an eagle tattoo. It is a muscular, agile, and powerful bird, so that is why it is preferred more among males.

Here are several of the most common meanings and symbolism of eagle tattoos:

Below, we are going to present you three of the most common eagle tattoo designs used among tattoo lovers:

The double-headed eagle in the Coptic pilgrimage tattoo repertoire of Jerusalem, probably come from Byzantine, where it has been utilized as an imperial symbol. Similarly, it was adopted for use by the clerical hierarchy of the Greek Orthodox and American churches.

This tattoo actually shows the fight between this bird and the snake. Even if it is clear that the eagle has the edge, the snake is still fighting. The eagle that eats a snake while perched on a nopal cactus actually appears on the national flag of Mexico.

It is actually derived from the Aztec legend that the capital of Mexico, Mexico City, has been discovered according to the command of the god of war and sun Huitzilopochtli, who was sometimes represented as this bird. According to the command he gave, Tenochtitlan, which was the capital of Aztec and antecedent of Mexico City, was discovered in C.E. 1325 on a spot where one eagle was seen devouring a snake, ending a perilous and long migration from the traditional home of Aztlan of Aztecs to the Valley of Mexico.

The eagle that grasps a group of arrows is a patriotic variant of eagle iconography which was utilized in the Great Seal of the United States and adopted in 1782.

The bald one actually clutches an olive branch, which had thirteen leaves and thirteen berries, which stands for peace, and together with thirteen arrows, which stand for readiness and war. Thirteen was also the number that represented the original colonies. The ribbon in its beak carries the motto “e Pluribus Unum’ meaning “out of many, one.”

The types of tattoo you choose have to suit your intentions and desires, in order to make sure that you have made the right decision. Because of that, choose carefully. We don’t doubt that a lot of people will choose this amazing design, particularly because a majestic and fantastic bird is in question.