Across different cultures around the world, a feather is one of the most powerful symbols, representing freedom and connection to nature. However, feathers have a special place in North America.

Birds figure prominently in a lot of Native American creation myths, and the feather has always been a significant symbol to them, usually included as a design feature in their headdresses, weapons, clothing, tools, jewelry, and so on. 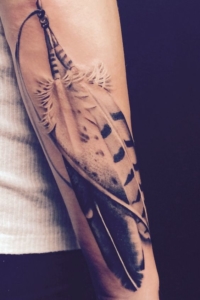 Native Americans believed that every part of nature had unique spirits, and so animals were believed to have their own too. They actually believed that the feathers of a bird carried the spirit of the bird which they fell from. And, as a result of that, feathers were usually granted to successful warriors, to honor their bravery in battle.

Feathers were seen as the gifts falling from the sky. When one falls on the earth, Native Americans believed that it actually carries with it all of the energy of the former attachment to the bird, wind, and also sky and represents the power of the thunder gods, air, and wind.

Native American chiefs would also wear a lot of feathers during certain ceremonies, in order to represent the connection they have to spiritual realms, while warriors were given one as a special gift when they were exceptionally honorable and courageous in battle.

They believed that birds might actually act as spirit guides, walking them through different stages of life, such as teaching, guiding, as well as offering protection. The feathers from an eagle are one of the most honored, and they hold great importance.

The feather tattoo is definitely one of the most sought after tattoo designs when it comes to cultural symbolism and heritage. The feather actually comes in different designs and styles and has a quite rich background with meaning that mostly depicts the character of the bird of which it was taken.

Feather tattoos carry such an authentic unisex tattoo element which normally holds symbolic meanings such as the capacity to take flight either spiritually, emotionally, or also creatively.

The feather chiefly can symbolize lightness, or what lifts the birds into the sky, and so it is also connected with the ascent to heaven, as well as supernatural divination.

The Egyptian goddess Ma’at wore a single ostrich feather headdress and utilized a single feather to weigh against the heart of the recently deceased that wished to gain entrance to the afterlife.

Among the Zuni, however, feathers are utilized on pray sticks that are planted in the ground, but that eventually carry their requests to the gods above.

In the headdresses of the native inhabitants of the North American prairies, a feather actually recalled an act of courage by the one that wears it.

While most tattoo art encompasses the motifs noted above, there can also be occasional lone peacock feather, or also those to be found in dream catchers and also attached to the medicine shields.

There is actually more to a feather tattoo than our eyes can meet. As it is one of the most widespread themes for tattoos nowadays, feathers may find a way into the skin in a lot of variations. Depending on the sketch that you have chosen and the way in which the tattoo master interpreted it, your tattoo may look like no other, and as a consequence, carry its unique meaning or also message.

Furthermore, if you want to link your tattoo to some person or event, the symbolism in the given feather is going to be intimate, as well as personal to you.

But, when we speak in general terms, feathers tattoos tend to carry a variety of meanings, which often depend on the very type of feather which is depicted and the general style of the tattoo, as well.

Some of the most frequent symbolism and meanings associated with feather tattoos are the following:

The feather was also symbolic in ancient Christianity, and it is believed to be the symbol of virtue, which was mentioned several times in the Bible. For example, verse four of Psalm 91:

“He shall cover you with His feathers, and under His wings, you shall take refuge; His truth shall be your shield and buckler.”

You can see three of them rolled like a ring, which is a representation of hope, charity, or faith. Moreover, it was symbolic of the Celts whose druids wore feather robes in ceremonial events. The Egyptians actually believed that they had been connected with the sky gods. A lot of other cultures, as well as religions ascribed special spiritual symbolic or spiritual meaning to them.

As you can see from above, the feather is a quite symbolic thing in several civilizations and cultures, and in each of the contexts, its meaning is slightly different.

Of course, there can be a lot of other meanings to this tattoo design, as every piece is an individual work of art or it may also carry a very intimate and personal message.

The feathers of birds are connected with a lot of symbols all over different cultures, representing different aspects of human life. Regardless of the fact if you feel deeply connected to nature or you are a passionate bird watcher, there is a feather tattoo for every type.