Badger is rugged, as well as a persistent and intelligent creature that knows how to get what they want and survive in the surrounding environment. They will fill these very basic needs with remarkable ferocity, too if they need to.

In the West, with only several exceptions, these animals are predominantly connected with aggression and hostility, as in one being badgered, for instance. However, for the Japanese, the potbellied badger is a symbol of cunning – more like the fox from the West, but with the added meanings of prosperity, self-satisfaction and self-advancement. 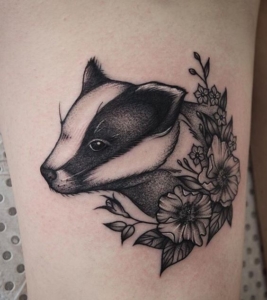 They are usually seen as statues standing at the front door of business establishments in Japan. When they are, it is a cue that there is a very shrewd and cunning business owner at the helm.

Badgers are also incredibly intelligent animals. Their intelligence is two-fold: they can strategize, sure, but they can also maintain uncanny sensory perceptions. They are infinitely connected to their surroundings, and they have the ability to perceive even the smallest shifts in their environment. Their cunning also permits them to strategize their actions to their best advantage.

With their black and white fur, as well as short legs and round bodies, these animals were the subject of books, poems, stories, and legends for a long time. Also, with their distinctive fur and markings badgers are a perfect subject for a tattoo, and even though they do not have any specific meaning or symbolism, they are often seen as a symbol of nature and wildlife. So if small wild animals are your thing, then you’ll love these tattoos for sure!