Charisma is a powerful weapon, and you can enhance it with a cute fox tattoo on your body. The little red fox is a fascinating predator, and it looks in the eyes for a second, and the other one turns into a little devil.

The cunning little fox is fearless and clever, and it is aware of its worth, without asking for help. Such wild energy became an excellent inspiration for different styles of fox tattoo designs.

The myths of different continents and countries associate this beautiful predator with something self-centered, clever, lonely, and cunning. Usually, this animal becomes an anti-hero too. However, there are certain exceptions to this rule, just like the Japanese fox. In Japan, a fertility goddess, Inari, could turn into a fox. 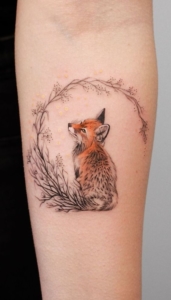 In Greek mythology, Dionysus, the god of wine, also had the ability to become a fox. Generally said, stories about them shape-shifters are common among people, particularly in Eastern cultures. This is symbolic of femininity and sexuality.

This predator, just like the coyote, is many times not just the trickster but also a hero in different cultures. “Crazy like a fox” means inventive by destructive, and alert but careless.  This also has its association with good-looking women in the United States.

In China, this animal finds its association with seduction. Maybe because of its contradictory behavior it reminds us of ourselves. The fox takes on a lot of the aspects of human consciousness, as well as behavior.

For the Celts, this image denoted wisdom, and because of its ability to see the land of fairies, the Celts revered the fox. They sometimes depicted foxes as the servants of the devil.

In Mali, the fox represented a clever trickster, and this same meaning is also present in Scandinavian myths. For Egyptians, the fox signified deceit, hypocrisy, and depravity. In the Slavic culture, a fox embodied a notorious person.

These tattoos are very common nowadays, mostly because of its meanings and symbolism. For example, for Indians, this represents an especially adaptable predator and a master of survival. They appreciated the animal as it is able to adapt to the space of its location and find the best way to handle any problem.

A lot of cultures from the past considered the fox as the symbol of success and fertility. Usually, people connected it with femininity, and from this comes the name “Vixen” chosen to call seductive women and foxes.

There are a lot of meanings of foxes attached to human traits, and they are:

Although these tattoo designs can come in a lot of variations of different colors and sizes, foxes will never appear as superior animals. This means that they are never going to be life-threatening or hurt us. Instead, they will come like wild animals that are going to outsmart us.

In almost every culture around the world, the fox represents an animal that has highly developed mental capacities, excellent instincts for survival, as well as wondrous animals in the forest.

Many cultures describe this animal as a witty and cunning animal. Also, children from different cultures learned how to make solutions about certain obstacles in their lives. They also learned how they could solve those problems, through stories about foxes that others told them.

Among the abundance of variations of these tattoo designs, this head tattoo is deservedly taking the first place. This is a tattoo design that could be put almost on any body part. Also, it may be in combination with a lot of other elements that make the tattoo more beautiful and vivid.

We suggest you think about this tattoo design if you plan to get a new tattoo. Choose it not because of its meaning and symbolism, but also because of its beauty. Remember that your tattoo will symbolize what you would like it to symbolize.