Home
Blog
The Boa Snake In Tattoo Art: How Are They Usually Depicted?

Snake tattoos are utterly classic ones. If you are a diverse soul, and you recognize the depth of your diversity, a snake tattoo might appeal to you.

In many cultures in the world, snakes are usually associated with water, and this emphasizes their connection to healing. This is because water is symbolic of healing, cleansing, as well as purifying.

Some of the symbolic meanings of snakes are birth, fertility, magic, mystery, protection, infinity, as well as sexuality and transformation.

One of the most famous groups of snakes is known as the boa group of snakes, which is made up of several types, one of which is known as the boa constrictor. The boa constrictor, which is also called the red-tailed boa or the common boa, is a species of large, non-venomous, heavy-bodied snake which is frequently kept and bred in captivity. The boa is a member of the family Boidae, which is found in tropical North, as well as Central and South America, and some islands in the Caribbean. Currently, there are ten subspecies recognized, even though some of these are controversial. 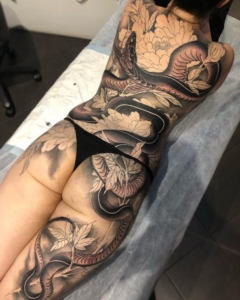 Contrary to popular beliefs, boas, bite their prey. Then, they kill it by constricting their large bodies around the victim and either suffocating or crushing it.

In tattoo art, the boa snake is usually depicted coiled around something, such as a branch, another type of snake, or even around the arm or torso of the bearer of the tattoo.

The skin patterns of the boa snake are usually composed of blotches and diamonds colored green, brown, as well as yellow. This particular snake maybe carries a few historical associations than the viper, but it falls into a symbolic line with some other predatory animals, being both intimidating and fearsome.

Snakes are usually a protective symbol. They are considered as the protectors of the underworld and are usually in the funerary art to convey guardianship over burial sites. Numerous cultures recognize snakes as protectors of complex mysteries, and that is why we see snakes commonly adorn magical personalities through history.