Home
Blog
The Caterpillar With Hookah: Inspired By The Book of Lewis Carroll

The caterpillar, which is also known as the Hookah-Smoking Caterpillar, is a fictional character that appears in the book of Lewis Carroll, Alice’s Adventures in Wonderland. One of the casts of characters from the book is the giant blue caterpillar who is sitting atop a mushroom and lazily smokes a hookah pipe. He is an image that has resonated with tattoo lovers and wearers.

While some see this character, which first appears in chapter 5 of the book, titled “Advice from a Caterpillar,” and wrote him off as nothing more than a self-medication addict of the hookah, the reality is that he serves as more of a checkpoint or even a guardian for Alice’s journey through Wonderland. 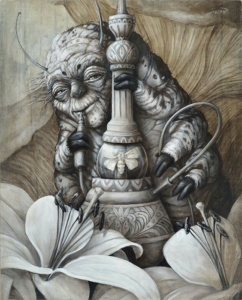 The original illustration by John Tenniel is something more of a visual paradox, while the human face appears to be formed from the head and legs of a naturalistic caterpillar.

The caterpillar with hookah symbolizes the utterly relaxed smoking experience of the typical tobacco water pipe on one level. Still, it also hints at the possibility of the pipe containing a narcotic.

He starts by asking Alice the simple question, “Who are you?” When she finds that she cannot say who she is, there is no doubt that a side effect of constant exposure to the chaos, as well as to the nonsense of Wonderland exists in her. The caterpillar recognizes that the time of Alice in the strange land took a serious toll on her sense of self.

According to some, the remarks of changing the size and the general shape of the body of the creature are metaphoric of sexuality. This is compounded with the observation of Alice that he is going to metamorphose into a butterfly, as well as the size-changing properties of the mushrooms within the area of the forest of the caterpillar. Yet there is also another interpretation saying that you should be careful in who you trust when feeling lost.