In the year 1865, an English author named Charles Lutwidge Dodgson produced a book which was titled Alice’s Adventures in Wonderland, under the pseudonym of Lewis Carroll. The book told the fantastic tale of one young girl, named Alice, who stumbles into a mystical, as well as the magical world. The story also follows the journey of Alice though usually nonsensical world and the bizarre, humorous characters which she meets along her way.

In 1951, the most famous animation studio in the world, Walt Disney, has produced a film which was based on the book of Lewis Carroll. Disney simplified the title of the book of the film, calling it Alice in Wonderland, a title that has stuck with the story into modern times. However, Walt Disney didn’t stick strictly to the story, which was depicted by the books. Still, it used the characters of Lewis Carroll and the Wonderland environment as a base for his highly imaginative, as well as usually psychedelic animations. The cartoon characters of Disney are actually among the most popular chosen for Alice in Wonderland tattoos. 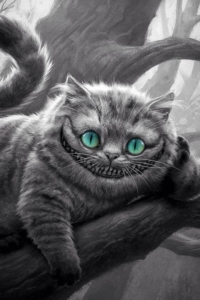 Even though fairy tales and fantasy stories were around for a few centuries, the characters in Alice in Wonderland were new and unusual. Although they bore a resemblance to human beings, the personified creatures in the story of Lewis usually had a mystical or magical air about them. Tattoos of characters of this tale lift these creatures out of their media existence, giving them new life as body artworks.

One such character of the famous tale for children is the Cheshire cat, which is for his grin that still exists, even when the rest of him becomes invisible. Out of the different characters from the tale of Lewis, he is one of the most popular for a few different reasons. The fact that he is also one of the few friendly characters that Alice meets on her adventures is one of those reasons. In a more profound sense, a lot of people usually find a smile calming, as well as pleasant or irresistible. In this particular case, the smile is actually an interesting and unsolved riddle, as the reason for his grin is never revealed.

The Cheshire cat is also an unusual character, particularly as far as symbolism goes, as cats are traditionally a symbol of femininity. They are thought to have the ability to travel to other realms of existence, like the Underworld and the afterlife. They are guides through these worlds, and they also protect people from dangers which they encounter is those same places. The Cheshire cat has a masculine nature, which stands opposite to the feminine symbolism. He disappears or reappears, usually transforming physically in the process, which means that he is unreliable and unpredictable.