Tattoos as a tradition probably would not be the first thing to cross the mind of a person, when thinking about Croatians. However, they are. Traditional symbols have a connection to Christianity. The custom itself is even older and was probably present back in history around these areas. 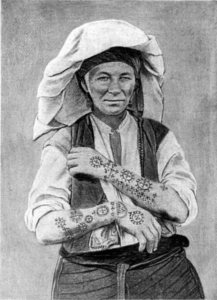 The Croat women in Bosnia and Herzegovina have a thousand years-long tradition of tattooing their hands. These tattoos still bring back memories. They were tattooed as little girls, some of them obliged to, and some are expressing their wish.

The tradition comes from the places that the Turks once occupied. This happened at the time of the Ottoman Empire. The purpose of these tattoos was to prevent the kidnapping of young women and their conversion to Islam. Still, the idea of symbols and writings on the body originates from older periods.

One archeologist and a custodian of the National Museum in Sarajevo, named Ćiro Truhelka, has been researching the pre-Ottoman Bosnia and Herzegovina during the 19th century. According to his findings, the origins of the custom could be in the Illyrian and Celtic tribes and their rituals around the areas. Even some of the simple tattooing needles were present in tombs of those days.

This traditional custom definitely survived the coming centuries. However, it was mostly present during the reign and fear of the Ottoman Empire. During this time, people used Christian symbols for protection against foreign forces.

Christian tattooing in Bosnia and Herzegovina was a very widespread custom among Roman Catholics. This happened during the Ottoman rule over Bosnia and Herzegovina (1463 – 1878), and up until the 20th century. Catholics used to tattoo their children to save them from kidnapping and conversion to Islam. They tattooed women in hopes of avoiding enslavement.

The traditional custom probably predates the Slavic migration to the Balkans and even Christianity. During the 1st century BC, the Greek historian Strabo mentioned tattooing among the inhabitants of this area. The tattooing was present along with another Illyrian custom.

Among the Catholics mostly in Bosnia and Herzegovina, there was a widespread tradition of tattoos on hands, arms, and chests until the middle of the 20th century. Ethnographers suggest that the origin of the specific custom can’t be Catholic. They even say that it cannot be a Slavic tradition too. They say that this tradition comes from prehistoric Balkan tribes.

The beautiful linework and Christian cross looking geometric designs is not only an aesthetically pleasing design. These medieval tattoos from Croatia indicate the harsh history of the Balkan. Moreover, they indicate the resistance against the Ottoman armies that were kidnapping Christian children and women.

A lot of families under Turkish occupation used these tattoos as a form of protection. They marked their women and children in order to remember their faith even if someone forces them to convert to Islam.

The symbols and patterns are often designed as discreet crosses. Women mostly did them, and they were doing the act of tattooing on holy days. This art over the course of centuries was often forbidden. However, it has managed to survive nonetheless.

They usually combined the ink with the milk of mothers and with charcoal, honey, or other natural materials. A lot of older women in rural areas still carry on this tradition. Younger generations discovered these designs to be both symbolic and aesthetically pleasing and minimalist. The new generations are paying more tribute to their history than the older generations.

There are a lot of old ladies that still show off their traditional Croatian tattoos with pride. The young generations are paying more tribute to their history, family, and tradition. These tattoos aren’t just gorgeous, but they show the strength of the amazing female tradition. Also, they show the weight that this tradition has on their history.

Just like we already mentioned, the traditional symbols are crosses, sometimes tattooed around the wrists of women. They looked like bracelets, and they looked very beautiful. The cross even has its variations with a sort of small pine trees. It even has non-Christian motives. However, they used everyday motives like circles, to symbolize collectiveness and union.

The lines around the circles had an association with mills as an inherent part of life. The lines even had small branches and together with a circle formed a special design called “Jelica.” This actually means that they mixed two types of symbols. One of them originated from nature and family in Illyrian times, while the other was added later and was given a new meaning.

The traditional Croatian tattoos are definitely something that has marked the period of the Ottoman Empire. There is a number of examples that show usage of this kind of motifs in Macedonia also but not as many as in Bosnia and Croatia.