Home
Blog
The Tree Of Life In The Bahrain Desert: Magic, Life And Power Of Nature

I was talking before about the Celtic tree of life. Now, this is the Bahrain (desert) tree of life with similar and deep, meaningful symbolism like his Celtic brother. Let’s start from the beginning.

The Tree of Life, or as it is called in the local language Shajarat-al-Hayat, is a lonely mesquite tree that stands in the heart of the desert Bahrain for over 400 years. The Tree of Life of Bahrain is a real beauty. It is a low and wide tree, and its thick branches dive under the surface of the desert before they curve back up toward the hot Sun. It is also profoundly alone. 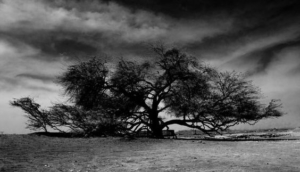 It stands on the top of the 25-foot-high sandy hill, as well as at the highest point in the desert, miles away from another natural tree and with no apparent source of water. With 32 feet in height, it counted growing, despite the extreme temperatures, lack of freshwater, as well as nutrients.

Although there was some evidence that the tree holds plenty of water in its massive root system, there is still no evidence of a source of water visible. Even arid vegetation needs some water in order to survive, which makes this Tree of Life even more mysterious.

This Tree of Life is the major tourist destination in the Bahrain desert, and it has survived for hundreds of years without any apparent source of water. Its age, as well as a destination, make this tree a true survivor, which is regarded as a remarkable natural wonder of the world witnessed by most who visit Bahrain.

Without any rational explanation for the biological success of the tree, many have turned to mythology and religion for answers. Some consider that Enki, who is the ancient god of water in Babylonian and Sumerian mythology, is the protector of the tree. Others still believe that the site is the historical location of the Garden of Eden.

It is known as the Tree of Life because the tree stands amidst a hot, as well as desert without any water source feeding, which truly represents the magic of life, as well as the power of nature.

Whatever the answer is, and no matter how mysterious it may seem, the tree has shown no sign of dying, and it continues inspiring as it stands proudly in the tiny desert nation. Only one mile away from the tree is the hazy Jebel Dukhan, which is the highest point in the desert. From 440 feet above the sea level, the hill permit for a true appreciation of the barren landscape in which this tree has thrived. However, everything said above makes the Tree of Life a legend.