Music is a universal language. A lot of people consider it as a daily part of their lives. It is quite hard to find someone that dislikes music. Music deals with how people are able to express their emotions to others around them, without even speaking out loud.

Some people know that music is an excellent way to talk about things. It keeps us company when we are by our lonesome. It makes us smile when we feel blue. If we do not know how to discuss our feelings about someone or something, music is here to help us. Music is also the primary source of expression, which helps us find inspiration in anything.

Sometimes, people like music a lot, and they will find it as an inspiration for a new tattoo. Music is a very common theme and motif when it comes to tattoo designs. These can come in the form of symbols, notes, lyrics, or a picture of a favorite artist. Others get tattoos of their favorite musical instrument. A music tattoo will always be an excellent idea for those that enjoy both – to listen and making music. 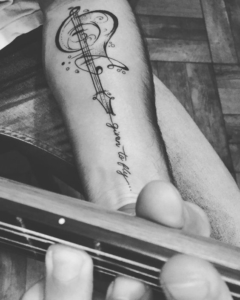 One common musical instrument which finds its uses in music tattoos is the guitar. People who play this instrument commonly do this tattoo.

The guitar is a fretted musical instrument that often has six strings. People typically play this instrument with both their hands by strumming or plucking the strings. The sound of the vibrating strings can be projected acoustically or through an electrical amplifier and a speaker.

This musical instrument has a history that goes back almost three thousand years. Guitars come in two varieties, which are acoustical and electric. The acoustical guitar has a flat-backed rounded body that narrows in the middle. It also has a long fretted neck, and typically six strings, played by strumming or plucking.

An electric guitar often has a solid body with a device which is known as a pickup. The pickup is a magnet that is surrounded by wire and which picks up the vibrations of the guitar strings. Then, it sends them to an amplifier that comes to the speakers, which converts it into sound.

There are many people in the world who play this instrument. We can also say that it is among the favorite of all the existing instruments. Because of this, it is also a common theme in tattoo art.

Guitars, as we know, belong to the world of music. Thus, the guitar tattoo designs are usually a representation of the undying love for the music of a person. Sometimes, people get guitar tattoos in order to pay homage to a musician or guitarist that died.

A guitar tattoo design is a favorite of musicians, with designs of electric guitars far out-numbering their acoustical brethren. Electric guitars are far more popular among rock musicians, while acoustic guitars with country and western music enthusiasts.

However, the guitar does not only represent musical activity. The electric guitar became the symbol of rock and roll and the culture which goes along with it. It is not like the giant guitars mounted outside the Hard Rock Café restaurants.

In tattoo art, it is completely okay to see specific electric guitars such as Fender Stratocasters, accompanied by flames. Alternatively, an acoustic folk guitar tattoo can be in combination with flowers. This all depends on the music style and the particular element that the bearer plays.

To some tattoo lovers, guitar tattoos are all about a love for music, both lyrics, and melodies. To others, a guitar tattoo is a symbol of rebellion or rejection of the norms of society. Still, there are even those that look at these tattoos as symbols of freedom and life lived on the open road.

The style of the guitar and the accompanying artwork does a lot to convey individual meanings. For instance, an acoustic guitar combined with flowers has a lighter feeling. On the other hand, a flying V electrical guitar, played by a skeleton using a snake for a strap, is definitely about taking a walk on the darker side of life.

People tend to get either of the two types of guitars in their tattoos. Together with a guitar, they also include a few other embellishments that we already mentioned. Such things or objects may be skulls, flowers, hearts, musical symbols, notes, lyrics, and so on. Such supplementary designs will not just make the tattoo look more attractive, but there will add meaning to it too.

Using musical instruments in tattoo art will always be a good idea. Such tattoo designs will not only be for people who play some instrument, but for those who are music lovers. Moreover, the guitar is a beautiful instrument by itself, and it has beautiful symbolism and meanings. You will not be wrong if you decide to transform it into a beautiful tattoo one day, believe us!