Home
Blog
Who Was Che Guevara And What Does Its Use In Tattoo Art Mean?

There are a lot of portrait images that are a common motif for beautiful tattoo designs. The number of such images is infinite, and a few of them transcended their particular individual symbolism in various ways. Most portrait tattoos are memorials to loved ones: friends, members of the family, and even pets that passed away. In such cases, getting the tattoo will be part of the grieving process. However, there are portrait tattoos of famous people too. They usually honor the person they depict, often because of his or her significance in the world. One such tattoo is of the major figure of the Cuban Revolution, Ernesto Che Guevara.

Ernesto “Che” Guevara is born on the 14th of June, 1928, and died on the 9th of October, 1967. He is an Argentine Marxist revolutionary, physician, guerrilla leader, author, diplomat, as well as a military theorist. He was the principal figure of the Cuban Revolution His stylized visage became a ubiquitous countercultural symbol of global insignia and rebellion in popular culture.

When he was a medical student, he traveled through South America and poverty, hunger and disease there radicalized him. His burgeoning need to help overturn what he saw prompted his involvement in the social reforms of Guatemala.

Later on, in Mexico City, he met Raul and Fidel Castro and became part of their 26th of July Movement. After that, they sailed to Cuba aboard the yacht Granma, to overthrow Fulgencio Batista, the U.S.-backed Cuban dictator. Soon after that, he became part of the insurgents, and they promoted him to second in command. He had a pivotal role in the victorious two-year guerrilla campaign, which deposed the Batista regime.

After the Cuban Revolution, he performed a couple of key roles in the new government. Those roles included reviewing the appeals and firing squads for the ones convicted as war criminals during revolutionary tribunals. He instituted agrarian land reform as minister of industries, helped spearhead a successful nationwide literacy campaign, and so on. He also traversed the globe as a diplomat on behalf of Cuban socialism. Such positions also gave him the ability to play a central role in training the militia forces in Cuba. Later, these forces took part in the Cuban Missile Crisis in 1962. Guevara left Cuba in the year 1965 to foment revolution abroad. The first unsuccessfully was in Congo-Kinshasa, and the second in Bolivia, where the CIA-assisted Bolivian forces captured and executed him.

Guevara is still a revered and reviled historical figure. There are a lot of biographies, memoirs, documentaries, essays, films, and even songs in his honor. Because of his fame and importance in the whole world, Guevara is a common motif in tattoos as well.

Only a few portrait images transcended their particular individualistic symbolism in the way that the image of Che Guevara has. He is a theoretician and tactician of guerilla warfare and a prominent figure in the Cuban Revolution. His death at the age of thirty-nine, while he fought for Communism in Bolivia, helped to ensure his lasting fame. 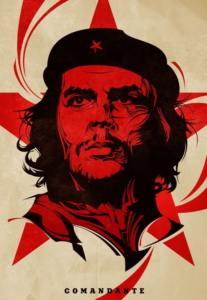 One photograph from the 5th of March, 1960, which the photojournalist Diaz Gutierrez made, became the most famous one worldwide. In the picture, Che Guevara wears a black beret with a star and has an uplifted but somber gaze. This picture is also a synonym for Communism and a revolution.

Guevara used his nickname, Che, in order to highlight his origin. Che is a common treatment in Argentina. Contemporaries describe Guevara as a strong leader, a strong-willed person who has the ability to fight for justice.

For the whole world, the portrait of Guevara became a brand. His appearance on bags, T-shirts, caps, is also common. However, this portrait is also a common motif for tattoos.

A tattoo of Che Guevara presents the wearer as a rebellious and dissent person, who demands changes. Usually, the youth of today choose this tattoo to show that they don’t recognize any authority.

The fashion for tattoos with the image of the rebel and revolutionary Ernesto Che Guevara grows every day. Even some modern stars, such as the boxer Mike Tyson, have a tattoo of Che Guevara on their bodies.

Generally, the portrait of Che Guevara is common on arms, back or chest. It can prick a contour or a color image volume, and with or without a cigar. If the wearer desires, the tattoo can be more personal. The tattoo artist can add any popular sayings from this famous revolutionary. One such is: “It is better to die standing than to spend all his life on his knees.”

Additionally to this, the wearer can also select the language in which the saying should be. The most common languages in which artists translate Guevara’s phrases are Spanish, English, and Russian.

The tattoo of Che Guevara is the most famous portrait tattoo which tattoo lovers commonly wear. This is probably because of the famous nature of the most prominent figure of the Cuban Revolution.

Tattoos are increasingly common these days. Around 40%