There’s something interesting about the star behind the ear tattoo design. Since the dawn of time, stars have a powerful symbolism. They were always associated with the heavens. The five-point star is one of the most famous representations of the star. This is the star with a single point on top, two on the left side, and two on the right side. The Christina star originates from Egypt. However, the idea and symbol of a star have grown through much more than that. The five points are supposed to represent the wounds of Jesus. This star is known as a pentagram. 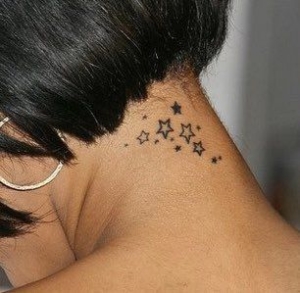 Stars have all kinds of forms, and each one means a specific thing. When it comes to the star behind your ear tattoo, the most common figure is the 5 pointed, pentagrams star. The reason for that is because it is the most recognized throughout the world.

The meaning behind such tattoos is associated with the things that the owner holds close and dear. Whether you have a special meaning or not, a symbol of a star can mean many, many things. It is also an image that attracts a lot of attention. It is a positive image, of course, with a lot more going on than what you see.

The tars in the sky help travelers find their way home and toward civilization from further back in history. They act as a compass and show the way when we are lost. This tattoo can represent just that, a symbol of finding one’s way.

The star behind the ear can symbolize hope, ambition, and even the desire to achieve high goals. The place behind the ear can signify that you will not stop until you reach the top. It can also mean that you are now ‘stardom’ or are internationally known or famous. This mostly refers to those who are in the entertainment industry or are well accomplished. These people have reached a high level of being recognized.

There is no better feeling than accomplishing a goal that you have set before yourself. For this reason, this tattoo is a good indicator that you don’t stop until you achieve this goal. Your interest in astronomy and the universe is another indicator of why you have a star behind your ear.

This kind of tattoo is also a common choice among those who are fisherman and sailors. People who live by the sea, fishing and traveling far across the world’s mysterious and vast waters. This is because when the compass fails, the stars will not. This image is popular amongst many people. The star behind the ears, however, is one that takes some guts to get. This is because this tattoo can easily be covered up with hair. It is also not easily recognizable unless the person with the tattoo is standing at a sideways angle.

The majority of stars that we see in the sky are bright, white balls of light. When we see this image somewhere else, it is burning bright yellow or any other color of your choice. As a tattoo, we want a pleasing image of stars to look at. If you don’t like the color yellow, you can change the color to your liking. This tattoo is so perfect thanks to the fact that stars are easy, elementary designs. You can have the 5 points, or even more points star. Also, you can even come up with your very own version of the star. You can easily fit this tattoo in small places such as behind the ear. A lot of people choose this spot for a star tattoo.

Many people choose to get the star with streaks of lines behind it, signifying a shooting star. You can even get more than one star behind your ear. You can also throw some streak patterns in there to give it a real astronomical effect. These tattoos often have color. A plain, black star is cool but not as cool as bright pink or blue and green star.

All in all, the star behind the ear is a very cool tattoo for any of us. The meaning is the same as with most star tattoos, but this design has a unique placement.