The All-Seeing Eye or the Eye of Providence tattoo symbol is identified as one of the most prominent symbols and more rampant than the golden arches. In recent decades, this particular symbol has been sparked up with a lot of controversies, associating it with the infamous Illuminati and the New World Order. A common American person will recognize it on the back of the US one-dollar bill. 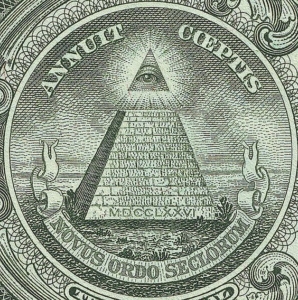 The all-seeing eye is a human eye that is surrounded by radiating beams of light within an unfinished pyramid.  It has been found in many cultures, as well as time periods, and it is designed in a lot of different ways in tattoo art. The eye is almost universally taken as a symbol of perception, not only in the physical sense but regarding spiritual vision, as well as insight.

Most often, this symbol is a watchful charm to ward off evil, alert, but serene. Also, it is reminiscent of the third-eye concept, such as that on the forehead of Shiva, where it unifies the perception of a lot of different dimensions.

Mostly, this eye design is associated with coincidentally, a triad of things, such as religion, Freemasonry, and, more recently, the Illuminati. The all-seeing eye goes way back, tracing the glory days of Egypt when the Eye of Horus was trusted to provide protection, as well as good health. Nowadays, there are a lot of people that confuse Illuminati and the Freemasons as the same; the all-seeing eye tattoo which has been identified as a corrupt and invasive symbol.

But, according to some sources, the all-seeing eye is supposed to be a powerful esoteric symbol, which is usually misunderstood and misused. There is more stress on the spiritual nature of the symbol. Due to the universal nature of symbolism, it is best left to some personal interpretation as to how one individual perceives the all-seeing eye.