Home
Blog
Who Were The Illuminati and How Was Their Symbol Used In Tattoos?

For those people who have interests in the mysterious secrets of the past, the Illuminati tattoo will be perfect for them. But what do we know about Illuminati? Who and what were they? When they appeared, and what was their main purpose? What their symbol looks like? Read below, and find out something more about the Illuminati, and the uses of their symbol in tattoo artwork.

Illuminating was a secret organization that included powerful forces in Western Europe. The main goal of this organization was to have power over society. Indeed, they had great power in the 18th century over society. However, year after year, it had become more conspiracy theory instead of reality. 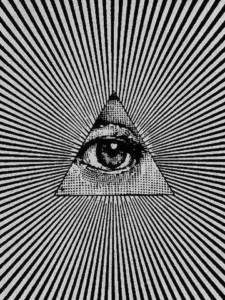 Historically, the name often refers to the Bavarian Illuminati, an Enlightenment-era secret society founded on the 1st of May, 1776. Its goals were to oppose superstition, obscurantism, religious influence over public life, as well as abuses of state power. The Bavarian ruler Charles Theodore outlawed the Illuminati, together with Freemasonry and other secret societies. He outlawed them with the encouragement of the Catholic Church in 1784, 1785, 1787, and 1790. In the next couple of years, the conservative and religious critics also verified them. They claimed that the Illuminati continued underground and had the responsibility for the French Revolution.

A lot of influential intellectuals, as well as progressive politicians, counted themselves as members. Some of them include Ferdinand of Brunswick, and the diplomat Xavier von Zwack, who was the second-in-command in the Order. The organization attracted men like Johann Wolfgang von Goethe, John Gottfried Herder, and the ranging dukes of Gotha and Weimar.

In subsequent use, the word Illuminati refers to the different organization which had a connection to the original Bavarian Illuminati. They also had a connection with similar secret societies. These organizations were alleged to conspire to control world affairs, by masterminding events and planting agents in corporations and governments. This was in order to gain political power and influence and to establish a New World Order. Illuminati is also present in dozens of novels, television shows, films, comics, music videos, and video games too.

Illuminati have a symbol that is famous worldwide and really speaks for itself. The pyramid with an all-seeing-eye inside of it represents their omnipotence over society. The all-seeing eye is placed there in order to see the problems of society. The all-seeing-eye can represent the symbol of God, as well. The pyramid is the symbol of hierarchy in society and their highest place in this hierarchy. Also, it has 13 steps, which symbolize the 13 Illuminati bloodlines.

In the Latin language, the word “Illuminati” means “enlightened ones.” As we already mentioned, this name finds its uses in describing many real and imaginary secret societies. However, its most common use is for the Bavarian Illuminati, a group established in 1776.

The origin of the symbol of the Illuminati is still a mystery. The eye within the pyramid has several names: the all-seeing-eye, the third eye, or the eye of providence. The general interpretation of the all-seeing-eye is of a reminder of the constant presence or watchfulness of an all-powerful being. This was common in the Western culture iconography of the 17th and 18th centuries. The triangle or the pyramid is likely an adjunct that finds its basis on the Christian trinity.

In tattoos, the Illuminati tattoo takes on a seemingly infinite number of shapes and forms. They range from winged versions with halos to the re-creations of the Great Seal of the U.S., just like the representation on the dollar bill.

These tattoos are full of weird secrets of the past. The intriguing symbols, images, as well as interpretations, find their associations with confidential societies. These tattoos may clearly make way to a member of a secret sect. They can also be just a catching body ornament without any specific meaning. Anyway, the Illuminati tattoos provoke great interest, as well as admiration.

The all-seeing-eye is common in almost every Illuminati tattoo. It is the most common symbol from the rest of the symbols. You can interpret the eye in several ways too. First of all, it can be the symbol of God or the Devil looking over the world. It can also be the symbol of the secret society itself, watching over us and controlling our lives.

You can adapt the Illuminati tattoo in many different ways to create a unique design. For instance, you can include animals and flowers in order to make the meaning more personal. You can even create a more artsy or abstract image by changing up the linework a bit. These are the types of tattoos that people like to get creative with.

Another thing that people may love about these tattoos is that they can look nice on just about any body part. Some people get them on their feet, others on their backs or arms, etc. It depends on the type of Illuminati tattoo that you choose to get and the final shape of the tattoo.