Home
Tattoo Meanings
The Symbolism Of The Alligator Tattoo

The symbolism of the alligator tattoo throughout history is different from person to person, but the known qualities of the animal is a general indicator. The ferocious and furious reptile remains with us for 37 million years ago. The alligator has managed to survive from the prehistorical ages of the dinosaurs. It’s secret as a top predator is its ability of concealment, as well as patience, and it waits for the right time to get out from the darkness of the brackish waters to reveal itself finally. It only reveals itself when it is ready to take action.

Alligators have come to represent a variety of symbols, depending on the culture in focus. Generally, these impressive animals embody status, creation, danger, balance, fearlessness, strength, intuition, and subconscious. In the West, this reptile symbolizes, sometimes to the point of killing without feeling. However, in China, the alligator is the inventor of the drum, as well as singing, and it may have even inspired the imperial dragon. 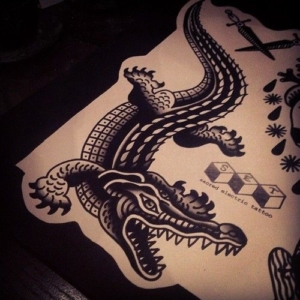 These animals keep many secrets to themselves, and the highest aspect of the alligator, as we already mentioned, is the dragon. It is the dragon that talks to the alligator, the magic of the Universe, as well as the natural world, and how they both work together. In the armor of a knight, the alligator keeps, holds, and protects these magical secrets.

Sometimes, the tattoos of reptiles include pop culture elements such as cartoon characters. It is an interesting contrast when a fierce, as well as fearsome creature such as the alligator,  is described as a lovable and harmless little tyke. The cartoon tattoos design expresses your lighter, as well as the more naive side. In reality, you are a gentle soul, but underneath the surface, there is a force that lies to be reckoned with.

The right alligator tattoo can make the difference between a piece that you like and artwork that you will love.