Until now, we posted many articles consisting of information on reptiles and lizards, as these animals are common motifs for tattoos.

Reptiles are tetrapod animals in the class of Reptilia, comprising the crocodilians, turtles, snakes, tuatara, and lizards of today, and their extinct relatives. The study of these traditional reptile orders, historically in combination with that of modern amphibians, is herpetology.

One of the most common motifs for tattoos from all the other reptiles is the lizard. Lizards are the widespread group of squamate reptiles with more than 6,000 species. They are ranging across all continents, except Antarctica, and most oceanic island chains too. 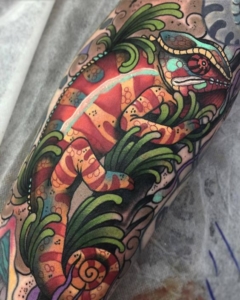 The group is actually paraphyletic as it excludes the snakes and Amphisbaenia. Some lizards have a closer relation to these two excluded groups than they have to other lizards. The lizards range in size from chameleons to geckos a few centimeters long to the 3-meter long Komodo dragon.

However, another significant lizard which finds its uses in tattoo art is the iguana. The tattoos of this lizard have several meanings and symbolism, and they look attractive, which is why people choose them.

The iguana is actually a genus of herbivorous lizards. It is native to the tropical areas of Central and South America, Mexico, and the Caribbean. The Australian naturalist named Josephus Nicolaus Laurenti was the first one that described the genus in one book.

In the genus iguana, there are two species: the green and the Lesser Antillean iguana. The green one is present throughout its range, and it is a popular pet too. The second one is native to the Lesser Antilles, and it is also in the group of endangered species. This is because of its habitat destruction and hybridization with introduced green iguanas.

Iguana is a word that comes from the original Taino name for the species, iwana. Additionally to these two species, several other associated genera in the same family have common names of the species, including the world iguana.

Iguanas can actually range from 1.5 to 1.8 meters in length, which include their tail. The two species of lizard possess a dewlap and a row of elongated scales. Such scales run from the middle of their necks down to their tails. Iguanas have varying types of scales which cover different areas of their body.

Iguanas also have to keep the vision, and they can see shapes, colors, shadows, as well as a movement at long distances. Their visual acuity gives them the ability to navigate through thick forests and to locate food. They employ visual signals in order to communicate with some other members of the same species.

The iguana is a large lizard of the Western hemisphere. Maybe because of its beautiful green color scheme or its status as a pet, it is popular in tattoo art. Among New World groups, the iguanas were very important to the Maya of Central America, where they were sacred animals.

Their distinctive, as well as powerful legs, large body, and equally large head, in combination with a long tail, make them ideal tattoos for longer body parts. Sometimes, despite their potential for vibrantly colored designs, black tribal versions are also common.

Some of the most specific meanings and symbolism which the tattoo of this lizard carries are:

Lizard tattoos, which include iguana tattoos, are the symbol of the search for light by the human soul. Regardless of the fact if you want to tattoo only the iguana, or to combine it with something else, remember that it has to symbolize a significant thing or occurrence in your life.

Usually, people get the iguana tattoo as the creature is of some relevance to them. Whether or not one has traits similar to iguanas reptiles does not mean that he likes or dislikes them.

This creature fascinates many people, and that is another reason why they choose it as a tattoo design. Other people who choose this design are either owners of iguanas, which they keep as pets or people who want to have them. To some people, iguanas are their favorite animals.

These are some of the main reasons why people decide to get a tattoo of an iguana. However, you should think about yourself, without thinking of other people’s reasons. You need to do something before you get this tattoo.

You have to research quite a lot in order to find out more meanings related to this design. In that way, you will see whether it corresponds to your personality, or it doesn’t.