Among many animals, the ant is one of the many types of insects that can also inspire great tattoo designs on your body that has a deep spiritual meaning.

The ant is usually connected with industriousness, both in the East and the West, but an industriousness that can be fantastic. While in the West, the ant is often seen as selfishly greedy, in Tibetan Buddhism it is excessively associated with the good things of this life. Even just a regular observation of this dynamic insect can discover that it is working non-stop and lends itself to symbolize active, as well as hardworking engagement in this world, energy, and teamwork. 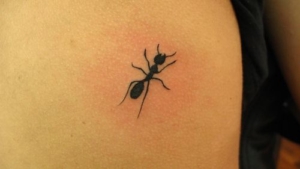 There is no doubt that ants have been a very important part of the history of humans, as they are one of the oldest creatures on the planet.

Ants are also known as great fighters as they will fight even with the insects which are stronger, as well as bigger than them. An interesting fact about them is that most of these strong and hardworking insects are females and they are very intelligent.

However, the meaning of ants is different in different parts of the world. For instance, people in China believe that ants will bring them compassion, as well as justice, but the situation in Switzerland and Bulgaria is completely different.

It is also known that they are usually associated with hard work and endurance. In Africa, it was believed that ants could bring people the message from God. There are a lot of other symbolic meanings of the ants, but in most of the cultures, they have positive symbolism.

As we mentioned before, the most important symbolic meanings of ants are their hard work, teamwork, discipline, organization, and strength. If you think that you have any of these characteristics, you can think of having a tattoo of an ant on your body.