Even though antlers will probably never be seen as a lone design in any type of tattoo, they do appear in contexts as part of some other (deer) designs. For instance, the Shaman in a lot of preliterate societies wears a headdress which is decorated with antlers. In fact, the so-called “Sorcerer” of the Paleolithic cave art of Trois Freres is a famous example that has been used for art tattoo. It is also possible that antler’s headdresses, as well as some masks, were worn during some kind of ritual dances and performances. In most of the contexts, the attachment of antlers is probably a link with wild beasts and a symbol of power. 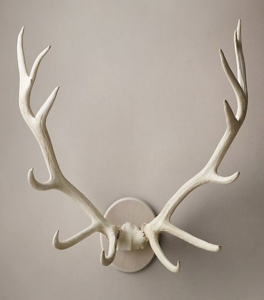 The deer is an animal that can be symbolic of soft, nurturing, and kind, while on the other hand, it can also represent power, dominance, and strength. Nowadays, a lot of people are an option for the deer antler tattoos as they can symbolize more than just the one that is the leader of the pack or the protector of the herd.

Just like how every deer has a different size antler, the meanings connected with it can vary significantly depending on different factors.

The deer have also been the subject matter for many ancient people dating all the way back to when people drew in caves. The larger the antlers were drawn on the deer, the more powerful the image.

Such depictions are still relevant nowadays, as the deer antler tattoos can symbolize strength, as well as power, purity, fertility, virility, and piety.

Some cave paintings from 14,000 BC represent the way in which the ancient man felt about the deer, and most of the time they also represent male sexuality. By the time when the Romans took control, they connected the deer with their goddess of hunting, Artemis. Nowadays, the image of the deer is symbolic of freedom, longevity, as well as solitude.