Aquarius is the 11th sign of the zodiac, and it starts from the 20th of January and lasts until the 18th of February. The image of the astrological sign, which is symbolized by a part of undulating or zigzag horizontal lines representing water, is also sometimes a man pouring water out of an urn. 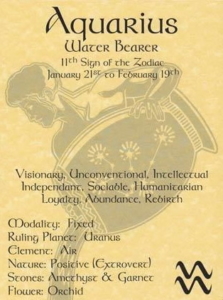 While all of the zodiac signs have certain psychological, as well as behavioral associations for people born during their intervals, for instance, Aquarius may be characterized as sociable, intelligent, and humanistic to the extremes of superficiality, dissociation, and imitative behavior, the sign of Aquarius also has become the symbol of the New Age movement and humanitarianism. That association may be delivered from the water which the Aquarius pours over the earth, which is interpreted as the water of awareness.

Tattoos of the Aquarius zodiac are extremely beautiful and have a wide variety regarding both designs, as well as size. One can get either just a tattoo of an urn overflowing with water, or they can also get a huge tattoo of the water bearer holding the urn. Also, you can even add the Aquarius constellation stars in order to make the tattoo more artistic and stylish. The tattoo can vary in place from the arm to waist to even back or neck. The water in tattoos can have a range of blue colors, as well as very artistic shading, while the urn could be as colorful or as shaded as one likes.

A person can experiment combining the elements until he/she is sure about what exactly he/she wants on his/her body for eternity. You can also get the word Aquarius tattooed in classic fonts for a crisp but cute tattoo.

Those people that fall under this sign are known for sticking to their rules and values. They are usually very independent and free. They have the will to spread love and prosperity.