This is the reason why nowadays, arrow tattoos symbolize strength in a specific phase in someone’s life and direction in finding your way. They also stand for personal achievement and the fight it takes to get there.

An arrow on a bow tattoo

The design that includes an arrow pulled back on a bow but is not released stands for intense focus, preparedness, and aim. If the arrow is released from a bow, this design symbolizes a transition from focus to action. A person who owns one of these two designs might be revealing to the world that they are ready for whatever comes in their way as well as keeping the focus they need to be readily prepared.

If you happen to see an arrow with the tip broken off of it, you immediately think of it as a representation of defeat. However, this is far from true since it represents an end of the battle. People who own this kind of arrow tattoo are probably trying to describe that they have overcome a battle with themselves, such as addiction, breaking an old habit, or growing out of a negative personality trait.

This design has a very strong meaning since the arrow with a compass stands for the meaning that, no matter how far away you’ll run, your 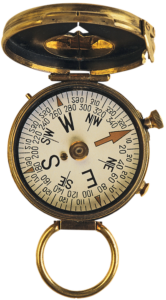 target will still be hit. This tattoo can be associated with a phase of life when even if you were somehow losing your path or way in life, and you were still able to achieve your goal or conquer a fear or unexpected situation.

Tattoo of a single arrow

Even though this is a simple tattoo, it is full of meaning. Most often, the single arrow is a small tattoo inked behind the neck, on one of your feet, wrists, or the upper arm. A single arrow is a symbol of independence and self-defense, and more popular among women of different ages. This tattoo also symbolizes one’s inner strength to defend themselves as well as everyone around them.

Very much as the design of two pieces of a heart, if the tattoo design includes two arrows that are crossed, that is a symbol of truce and friendship. The majority of people decide to get this design as a matching one with someone they love or have a close relationship with. However, if the design includes two arrows that are pointing away from each other, in this case, it symbolizes war or conflict.

The astrological sign Sagittarius is represented through an arrow symbol in the zodiac. According to astrology, an arrow and bow symbolize strength, masculinity, and a sense of direction. More precisely, this means that the zodiac tattoo is a symbol of the power to keep moving forward and the sense of direction never to look back.

Every person who sees a tattoo of Cupid’s arrow thinks of it as a love art design. The design of the Cupid arrow simply includes a heart with an arrow running straight through it. Even though this tattoo is really common, its meaning dates back to scientific mythology where Cupid, who is recognized as the God of desire and love, would shoot an arrow at people who he felt should be together, or pledged by love.

These are only some of the possible designs of an arrow tattoo, but you are free to experiment with your design and get creative in the process of making a unique design. An arrow tattoo can symbolize the warrior side of who you are, but it’s essential to remember that not all arrows stand for the same thing. No matter whether it symbolizes power, direction, self-defense, focus, or independence, this motif indicates that you are always willing to fight anything that gets in your way of life, even in the case you are fighting with your inner demons.

This is a popular design these days and has a lot of different combinations that we can use in designing our art. We can use countless different variations and combinations to draw the motif that will be a meaningful, powerful, and strong tattoo design. Realism, tribal, trash polka, or minimalism tattoo styles are one of the many that are at our disposal, and we are free to use them as long we have a strong story behind the design.