Arrow tattoo is one of the oldest, simplest, and most common symbols. For a long time, arrows have had a highly important spot in history. They have appeared in a lot of Native American cultures. Also, it’s been used in history, as well as warfare, hunting, visions, dreams, and plenty of other signs. The arrow has also shown up in ancient, as well as modern and recent histories. 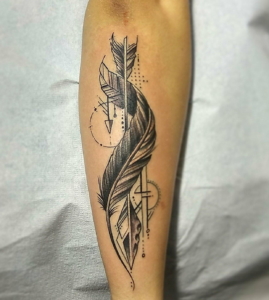 Like any other fundamental symbol, the range of meanings that it can take is very broad and tends to be contradictory to times. It has come to be connected with the male sex, lightning, weapons, swiftness, love, intuition and sudden death.

The arrow is a symbol that has also been usurped by a lot of disciplines, indicating an exponent in mathematics, as well as a center of gravity in physics. Its appeal is direct in the sense that it can be used alone or in combination with some other symbols to construct more complicated meanings.

There are limitless ideas with arrow tattoos. You can make an arrow tattoo that combines loads of cultural and historical significance. A single arrow is one of the most popular types of arrow tattoo designs.  When it is about symbolism, a single arrow can be pointed towards a specific direction. In real life, they can serve as a form of protection from evil and negative elements. An arrow can also change its meaning, depending on the other symbols which accompany it. A single broken arrow can be a symbol of peace, and an end to a long conflict.

The arrow tattoo is often seen as a sign of masculinity. This is the most likely one of the reasons why a lot of those that get this kind of tattoo are men, more so than women. But, this does not fundamentally mean that the arrow is just a tattoo design that is limited to guys. Women can get this kind of tattoo as well, and some even include sub designs to it, in order to be suitable for the type they want to.