The ax is a very old instrument, and it is among the first weapons, as well as the first tools which were used by man since the Neolithic Age. The ax has been especially symbolic of both battle and work.

The ax, being a symbol of more than just manual labor, is a representation of the wild world as it has been once carved out by man.

All men, since ancient times, possessed an ax and seem to have used stone axes, which were particularly used for hunting, for self-defense, as well as for woodworking. Their use in creating sparks has maybe led to their prevalent connection with storms and with lightning, as well as with rain and thunder.

For some people, just like the T’ang Dynasty Chinese, stone axes were considered to have fallen from the sky. Nowadays, with heating from fossil fuels, new materials, as well as new ways of producing them, and new weapons, the ax had lost that very important function that it had once when there were even the carpenters that built the ships. 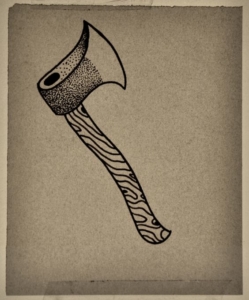 In particular, the ax was dear to the Nordic peoples, who actually made it a symbol of pride in the patriarchal society which even attributed divine properties, as it was also the weapon of the thunder god named Thor, who was also the father of the gods to the ancient Scandinavians.

Such kind of features was transferred to the tattoo in order to symbolize not just the courage, but also the defense of the community, as well as the family, fatigue, and strength, but also sacrifice.

The ax tattooing has to reflect these characteristics of a strong person, who is ready to battle for his defense, willing to sacrifice him/herself. A strong, though person that fears nothing, even the death.

In tattoo imagery, the ax can stand alone, or it may also be integrated into a larger design, such as a Viking scene or a Boris Vallejo painting. Their presence in most contexts is going to draw upon their use as one of the earliest weapons of humankind.