If you are a fan of superheroes, there are a lot of choices when it comes to getting a tattoo with one of them. However, there is no doubt that some of the most popular ones include the famous Batman. These tattoos have everything cool in comics and superhero movies. Most of the Batman designs look cool as tattoo designs.

Batman, also known as Bruce Wayne, is an internationally iconic superhero created by DC Comics. This superhero first appeared at the end of the 1940s. Batman is responsible for maintaining justice in a city analogous to New York with vigilantism and brute force. Due to the lack of superpowers, he relies on his martial arts skills, quick wit, and gadgets. People seem to consider him as a superhero because of his caped crusader. The type of tattoo design someone gets is not that important. These people love Batman’s many great qualities and understand that he is imperfect like every other human on the planet. 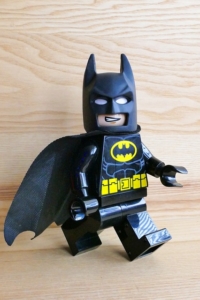 People can easily relate to Batman because of his humanity and that their abilities are achievable by any dedicated soul. This fact, as well as his overall look, makes it easy to understand why so many people choose to get Batman tattoos. If you choose this meaning for your tattoo, you should include Batman’s face in the design rather than just getting the logo. This is because showing the man in the mask will allow others to know that you admire the man just as you admire his superhero abilities.

One popular Batman tattoo is the one that includes his logo. Batman’s logo can be designed in different ways. In the original version, the sharp-lined bat silhouette is solid black. However, it can be full of designs that make the image appear more complex. If you want a smaller design, this is the best version of the tattoo that can fit on your arm, your forearm, or even your wrist. The Bat-superhero logo tattoo can look great as a more massive tattoo as well.

A lot of people who decide to get the Batman logo tattoo also incorporate other cool elements in the design. For instance, some people choose to get Batman’s face in the middle of the bat silhouette. Other people put the logo in the bat signal with a light shining up into the sky.

Another cool design for this type of Batman tattoo is to get the outline of the logo with a famous Batman quote inside of it. If you include images of Gotham City, Batman himself, any villains, or anything else related to the comics, it will create an authentic image. This tattoo allows you to mix in as much Batman content as you want without making the design look messy. Certainly, these can still be complex designs, so you need an artist who has experience doing superhero tattoos.

As Batman began as a comic, the original images from the comic strip convey the history and origins of the superhero. There are hundreds of scenes, black and white, or colorful, which serve as stunning images for tattoos. For a more meaningful batman tattoo, you can get specific scenes inked on your skin. This will show off your favorite moments from the series. You can also use an image from your beloved comic simply because you loved the expression or the mannerisms shown in that image.

You can point to a favorite issue of the comic book or particular plotline by getting fighting scenes. They include iconic combat written sound effects (BAM) or scenes that include dialogue. In this case, you should choose a scene that made you love Batman or that had an intense impact on you. A lot of people get their Batman tattoos with Joker in the image. This is because so many of their interactions make up the most iconic moments in the Batman series. Some people get those scenes directly out of the comic books, while others get custom art done as a devotion to their favorite Batman moments.

Getting the image of this superhero with his suit on is the most obvious choice when it comes to this tattoo. After over 75 years in production, he offers dozens of options for the costume. The distinct styles of “bat-suit” worn by the hero symbolize the different eras of the Batman comic. The suit varies from grey with yellow and a blue cape to the modern, entirely black. Sometimes the suit is designed with a red bat symbol on the front, but more commonly yellow. The material also improved with time. It varied from tighter, spandex, or cloth material to a heavier, armored suit with defined muscles to appear more intimidating. The decision to look and wardrobe depends on your favorite Batman looks and the colors that you want to have done on your body.

A lot of designs include Batman and his sidekick Robin. Robin is often a much brighter colored hero who emphasizes Batman’s darkness. Combining these two in the design shows that you recognize the need for help. It’s not important how strong you might be. It can also mean that you liked all of the series when he had his best friend with him. If you plan on containing both of these characters in your Batman tattoo design, you should find a larger spot on your skin, such as your back or your stomach.

Another iconic tattoo design is the Bat-signal used by the Commissioner to alert Bruce Wayne of crime. The most “epic” looking bat signal tattoos are those that include the detailed image of Gotham City with the signal shining in the sky above it. You are free to get a smaller tattoo with only the Bat-signal.  However, it’s a good idea to include some dark ink behind it to make it stand out a bit more.

People get a Batman tattoo to show that “fight for justice” or belief in something else that Batman symbolizes. If you are the guy or a girl who intends to help others, such as those who are unfairly treated, you are perfect for one of these Batman tattoos.

In short, there are a lot of designs of a Batman tattoo. You should take your time while finding the best one for you. If you are patient with this decision, without question, you’ll be proud of your Bat tattoo design for the rest of your life.