With the beginning of the art form of tattooing appeared the blackout tattoo concept, and it has been around for a long time. Around the world, the tribes were those who first experimented with tattooing. Thus the ‘tribal tattoo’ was created. Even today, they get tattoos to say what tribe they may be in, their status in the tribe, and even their loyalty to that tribe. Most often, the tribal tattoo was done in all black. They were using charred wood or bones to puncture through the skin, creating a permanent mark. Because tribal tattoos are entirely black, the tribal tattoo designs can be designed in countless ways.

The blackout tattoo started with tribal tattoos, and then expanded to many tattoo enthusiasts worldwide. The blackout style of tattooing is unlike any other. It takes a part of your body, such as your arm, chest, or anywhere you would like, and fill it with completely black ink. These kinds of tattoos can be done in different styles and for different reasons. Beneath are some of the reasons why people get this exceptional art on their bodies and ideas for you to better understand the blackout concept.

Tribal tattoos belong to the category of most popular tattoo styles. In the past, these entirely black thick lines appeared to wrap around the human body like vines growing around a tree. Different tribes used different tribal tattoos in order to identify who they were and where they came from. The warriors also wore tribal tattoos. Even though the wild patterns on their skin look as if they are just for show, they were sometimes used to tell an incredible story about the individual. 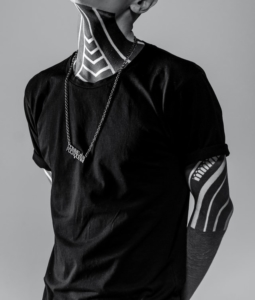 With the latest rediscovery of the blackout tattoo style, blackout tattoo enthusiasts from all over found a whole new way of getting them. These blackout tattoo tribal designs provide for the owner a mystifying yet subtle vibe. Usually, blackout tattoos cover a large part of the body. This means that you have to plan before getting entirely inked up carefully. The back, the pectoral muscles on the chest, the arms, and even the legs are some of the most popular places to get a blackout tattoo.

If you have a tattoo that you don’t like or you are tired of but do not want to go through laser removal, the blackout tattoo is perfect for you. A lot of people decide to remove an old tattoo and look toward a new solid future. The blackout tattoo not only looks great but also has a hint of elegance to it.  This way of tattooing can easily cover up any tattoos that you regret getting in the first place. However, shading over your cover-up is not as easy as it sounds. Blackout tattoos take time, endurance, and toughness. Depending on the size of the design, a usual cover-up for a tattoo done in the style of blacking it out can take from 6 hours to even 20. Covering the tattoo design both hides the tattoo and creates something entirely different for the owner.

Some people have rare skin pigmentation problems. As a result, the skin has a much lighter color than the rest of the body. Even though this is nothing to be embarrassed about, some people decide to conceal their beauty marks by getting a blackout tattoo. Others are proud of their skin tone and emphasize those areas by getting the blackout tattoo surrounding the specific patch of skin. Blackout tattoos are perfect in the sense that they can do things such as this.  However, what is even better about the blackout tattoo is its ability to make shapes within and around the blackout design. Hearts with the color of your skin may be included inside the blackout, amongst other patterns, you are willing to try out.

Not all of the people who get the blackout tattoo design want to cover a whole portion of their body. Some people rather get thick and bold blackout wrap-around tattoos. This kind of wrap-around body is one that circles a complete area, such as the wrists or forearms. This gives the illusion that you are eternally wearing some cuffs or wristbands/bracelets. These kinds of tattoos are ideal if you are interested in the blackout design but don’t wish to cover your whole body. Even if you are trying to conceal and cover up a small tattoo in that specific area, this design is basic or simple and has a sense of elegance and class.

All in all, this kind of tattoos takes a lot of time and patience to complete if you want it to look right. Before getting the blackout tattoo, you need to find a tattoo artist that has tattooed them already before and are familiar with the procedure. If you already have a tattoo design in mind before going to your artist, they may help or add in some creative ideas.