Home
Tattoo History
Brahma: The God Of Creation In The Tattoo World

For the Hindu believers, the whole creation is a cosmic activity and the work of three essential forces. Three gods symbolize these forces: the Hindu Trinity or ‘Trimurti’: Brahma — the creator, Vishnu — the sustainer, and Shiva — the destroyer.

In Hinduism, He is the architect and creator of the cosmos and all beings. The Vedas, the oldest and the holiest scriptures of the Hindu religion, are dedicated to Brahma. This is why in Hinduism, Brahma is the father of dharma. However, it is not the same with Brahman, which is a general term for the Supreme Being or Almighty God. Although Brahma is one of the Trinity, he is not as popular as Vishnu and Shiva. This god exists more in scriptures than in homes and temples. In 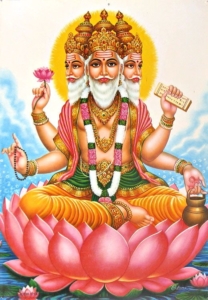 reality, it is hard to find a temple dedicated to Brahma. There is one such temple in Pushkar in Rajasthan.

The Birth of Brahma

According to the Puranas, he is the son of God, often called Prajapati. The ​Shatapatha Brahman says that Brahma is a child of the Supreme Being Brahman and the female energy known as Maya. To create the universe, Brahman first made the water, where he put his seed. This seed turned into a golden egg, and Brahma appeared from it. Thus, Brahma’s other name is ‘Hiranyagarbha.’ Another legend claims that this god is self-born out of a lotus flower that grew from Vishnu’s navel.

To help in the creation of the universe, he gave birth to the 11 forefathers of the humans (Prajapatis) and the seven great masters or the ‘Saptarishi.’ These children or mind-sons of Brahma, born out of his mind rather than the body, are named the ‘Manasputras.’

The Symbolism of Brahma in Hinduism

The Hindu pantheon often represents Brahma with four heads, four arms, and red skin. Different than any other Hindu gods, he carries no weapon in his hands. Instead, he holds a pot, a spoon, a script of prayers or the Vedas, a rosary, and on some occasions, a lotus.

He also sits on a lotus in the lotus pose. He moves around on a white swan with the magical ability to separate milk from a mixture of water and milk. The God Brahma is represented with a long, white beard, with each of his heads reciting the four Vedas.

Brahma rules over ‘Brahmaloka,’ a universe that comprises all the earth’s majesties and all other worlds. According to Hindu cosmology, the universe exists for a single day- the ‘Brahmakalpa.’ This day is equal to four billion earth years, at the end of which the whole universe gets thawed.

This process goes under the name ‘pralaya,’ which repeats for such 100 years, a period that represents Brahma’s lifespan. After Brahma’s “death,” it is essential that another 100 of his years pass until he is reborn. After that, the whole creation begins again.

Linga Purana, which defines the different cycles’ clear calculations, suggests that Brahma’s life is separated into one thousand cycles or ‘Maha Yugas.’

In all of the engravings, Brahma owns four heads. Hindus believe that from these heads came the four Vedas (the most ancient religious texts for Hindus). Some people believe that the caste system, or four varnas, came from different parts of Brahma’s body. He has four arms and is frequently depicted with a beard. Brahma’s ensemble is Saraswati, the goddess of knowledge.

Why is Brahma not worshipped so much?

Some stories in Hindu mythology explain why he is not worshiped so much. These below are the two views.

According to the first view, Brahma created a woman to aid him with his creation. The name of the woman was Shatarupa. She was so attractive that he became obsessed with her and followed her wherever she went. This caused her risky humiliation, and Shatarupa tried to turn from his gaze.

Ultimately, Shatarupa grew so irritated that she jumped to try to evade his gaze. Brahma, in his preoccupation, grew a fifth head on top of all. Some sources claim that Shatarupa kept changing her form. She became every creature on earth to evade Brahma. He, however, changed his form to the male version of whatever she was. So, he turned into every animal community in the world was created.

Lord Shiva reproved Brahma for representing the behavior of an incestuous nature. This is why he chopped off his fifth head for ‘unholy’ behavior. This god had preoccupied his mind from the soul and towards the cravings of the flesh. So, Shiva made a curse that people should not worship Brahma.

According to the second view and a more sympathetic one, Brahma’s role as the creator is over. It is left to Vishnu to protect the world and Shiva from staying on its path of cosmic reincarnation.