Shiva, also known as Siva or Siwa, is one of the most important Gods in Hindu religion and altogether with Brahma, and Vishnu is considered part of the Holy Trinity of Hinduism. Shiva is a complex figure that may be represented as a goddess. He serves as the Protector, but at the same time, he also has an evil side as the leader of dark spirits, ghosts, and vampires and as the master of thieves, villains, and beggars. Moreover, he is associated with time, particularly as the destroyer of all things. However, Shiva is also related to creation since, in Hinduism, the Universe is thought to restore (every cycle or 2,160,000,000 years). 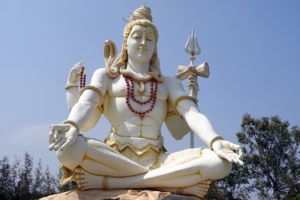 Shiva destroys the known Universe at the end of each cycle and, after that, allows for a new Creation. Shiva is also considered to be the great ascetic, refraining from all forms of luxury and pleasure, concentrating instead on meditation as a means to find perfect happiness. For the Shaivism sect, Shiva is the most significant Hindu god, the patron of Yogis and Brahmins, and also the Guardian of the Vedas, the sacred texts.

As a tattoo design, Shiva belongs to the Indian culture, full of mysteries and wisdom. Tattoos that belong to the Indian culture are not only considered to be beautiful, but at the same time, they have a sacred meaning hidden behind them. Images that belong to this ancient culture must be treated with respect and carefully chosen for inking on your body. In India, the most popular tattoo designs include images of sacred animals, insects, and Gods.

The deity Shiva came to India together with the Slavic-Aryan people. Shiva represents the side of the deity responsible for the destruction. However, it doesn’t destroy everything; it destroys only ignorance, which has become obsolete. This type of destruction is beneficial for the Universe. History says that Shiva came to restore the divine order and save the planet and humanity through destruction. According to him, wars, aggression, and negative events in the world speak of a low level of people’s consciousness and the need for everyone to think about their lives, to alter them. At the same time, God Shiva represents a personification of the male static principle.

Tattoos of Shiva are chosen as a spot of ink by people fond of this ancient religion and share it. It is more appropriate for the male part of the population. It’s better to choose carefully since it is such an intricate image, which carries a great deal of power. Shiva tattoo designs come in various sizes and can display a certain storyline. Particular attention should be paid to the color palette because each color has a certain semantic meaning in India. It is worthwhile to cautiously study the Indian culture and religion before getting a tattoo of Shiva.

The upper part of the body is perfect for a Shiva tattoo. First of all, this is because of the passage of energy fields through it. Moreover, the inking of images having a divine meaning below the belly is impolite.

There are several features through which Shiva is presented:

It is known that Shiva had a third eye on his forehead, which is also named the eye of wisdom that is liberated from “Maya,” the illusion and the dualities of life. Two physical eyes are considered as just sensory organs. The third eye serves to look beyond the obvious with clear perception and sees what is right. Shiva’s third eye is also special and famous for using fire to fight and destroy evil. Because of this, he is recognized as the destroyer.

We are all familiar with the fact that a venomous cobra can kill its prey with one bite. Due to this, by wearing a Cobra as an ornament around his neck, Siva shows us that he controls fear and death. It is also known that the snake’s three circles around Lord Shiva’s neck represent the future, present, and past. It proves that Lord Shiva is Independent of Time and controls time.

Shiva’s Trishul is the representation of the three fundamental aspects of life. Moreover, these three fundamental dimensions of life are defined in many different ways. They can also be named Ida, Pingala, and Sushumna. The Pingala and Ida are considered as the fundamental duality in existence. It is this duality which we customarily personify as Shiva and Shakti that symbolize masculine and feminine. These masculine and feminine are more in terms of certain qualities in nature, such as the logical and intuitive aspects of an individual. Sushumna, which is the central space, remains dormant but brings a balance between the Ida and Pingala. Sushumna is thought to be the most significant aspect of human physiology, and life begins only when energies enter into Sushumna.

With all being said, you should indeed do your research before making a final decision about getting a tattoo of Shiva.