The chain is used in prison tattoo in order to symbolize incarceration, but chains also have a wider symbolism that can relate to slavery and defeat too.

Whenever people see a chain, there is usually a negative connotation attached to the image, which makes sense. Very often, the chain symbolizes locking someone up or holding them down. Either way, people have different reasons to get this tattoo design or there is a great deal of meaning for those that own the tattoo.

On the other hand, there are other types of chains used in deferent ways. Not all chains were used to hold down. Some of the chains are used to set you free in a sense or to hold something significant in place. There are a lot of designs and variations that we can talk about and that will make you realize that there is not always a negative connotation when it comes to a chain tattoo.

When broken, the chain’s symbolism may just be the opposite thing, such as release, be it physical, mental, or both. They can sometimes symbolize liberation from a narrowing or challenging time in life. Unbroken chains are sometimes also connected with subservience in religious matters and are even symbolic of bonds, such as in Freemasonry. They may also convey the feeling of being limited, enslaved, or imprisoned.

Chain tattoos can be extremely powerful as they deal with issues of freedom and bondage. And, any time we talk about freedom, we think of human rights, which strike at the core of every human heartbeat. 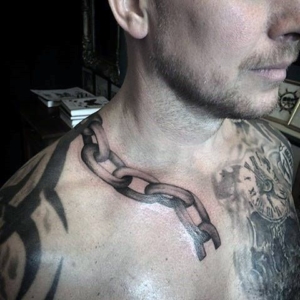 Since it was discovered, the chain has been acknowledged as a tool used more to help people rather than hurt. In the past, there were many ways chains were used outside of restraining people.

The first use happened back in 225 BC when the word was used to describe the device used to draw a bucket of water up a well. This word originates from the Indo-European language.

In the 16th century, sketches of the first steel chain with metal fittings, plates, and pins were drawn by Leonardo da Vinci. It is believed that these chains were likely used to pull instead of for wrapping around something.

With the improvement of technology, it took a while to catch up with the concept of the chain. It was difficult to maximize growth until the 19th century due to the problems with processing and manufacturing steel. They got it puzzled out when newer technology made bearings and steel chains possible. During the 1800s, a man named Gull from France discovered the patent that was similar to a bicycle chain. It was called the Gull Chain and is still used even nowadays.

After that, the molded chain was invented during the 19th century and things changed from there. The removable one with equal cast links was produced. After that came the pintle chain that had a separate pin. Both of these chains have been improved over time and are still used in many capacities.

Things completely changed with the invention of the bushing during the 1800s. New chains were developed with bushings and had better wear resistance. The reason for that was because the bushings would act as a bearing that secluded the pin. From there, the story of the chain moved forward really fast to what we know today.

There is a lot of imagery behind this tattoo motif and depending on how it is portrayed in the tattoo will tell the story of the meaning to that person. Most often, the chain serves as a way to represent a lack of freedom or symbol for oppression. This is probably the reason behind the tendency of these tattoos to be worn by people that are in jail or locked up in prison. It is a way to reveal to other people that they are being held against their will. In the same way, you will see a chain connecting handcuffs which is just another way to support the idea of being held against your will.

A chain tattoo idea may also be a symbol of honoring a bond of service or duty. It may convey a feeling of sacrifice too. For instance, if you have served in the military, you may have felt bound or chained to a code of honor. There is no choice but to serve your country. However, your heart may feel chained because of the pain and sacrifice that this duty brings. Chains in a military sense can also be a symbol of rank and office, for instance, a chain of command.

Chains can also symbolize an eternal connection with an idea or a loved one. A linked chain was a symbol of marriage as of the immortal relationship that soul mates share. In this light, this design stands for eternal love –,, particularly in marriage.

Another important symbolism that chains carry is one of friendship. More specifically, chains convey a sense of incredible strength and a joining together of a bond that can withstand all tests of time and hardship.

The broken link tattoo or broken chain tattoo symbolizes the receiving of freedom as opposed to what the chain typically represents. No matter whether we were once held imprisoned physically or spiritually, this version of the chain tattoo represents the idea of being free once again. Most often, this tattoo is chosen by people gotten out of prison, but there is a lot more meaning behind the broken chain tattoo for people who have experienced some sort of emotional freedom in their lives.

The bicycle chain tattoo is typically worn by somebody who enjoys riding a bicycle. It’s generally pretty self-explanatory. We often see these tattoos on bike messengers and those that race bikes. It’s a perfect way to let other people know what you are passionate about.

This tattoo design is the perfect choice to represent whatever you want. This is because the chain is holding the locket that is tattooed and this locket might hide anything you want. The locket can also have different shapes. It might include a photo of a loved one or a symbol that is significant to you.

With everything being said, we can conclude that there are lots of possibilities when it comes to this tattoo design. If you are certain that you want a chain tattoo but you haven’t figured out all the details, you can always research some designs online and create your own.

The symbolism and meanings of chain tattoos:

Even though these tattoos are usually considered a mainstream design, you will sometimes see them worn by both men and women. As these tattoos portray an actual chain, they are often inked around the neck, wrist, or ankle.