The cherry tree is among the oldest one of all cultivated fruit trees, and it happens naturally in Eastern Europe and Western Asia. It was since planted in much of the temperate zones all over the world. Interestingly, the natural cherry is part of the rose family. The tree was revered for both the beauty of its blossoms and the deliciousness of the fruit.

Several fruits have strong fertility symbolism, as well as deep red; ripe, juicy cherry is maybe the most prominent example. Cherries were used to symbolize feminine beauty, such as love and divination. 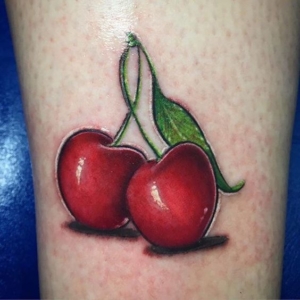 In ancient China, cherries were a symbol of immortality, as well as longevity. In Japan, the cherry was the symbol of Samurai. For these warriors, the crushing of the flesh of the fruit, to reach the hard pit within, was a symbol of sacrificing human flesh to get to the core of a person.

In tattoo art, it is very common to see the cherries paired, as they might come in nature. They can appear only by themselves or sometimes in the mouth of a classic swallow. In these Western contexts, they take on a sexual overtone about virginity, as well as its loss, which is differently interpreted as “gone forever” or “Here’s mine, where’s yours?”

Cherry tattoos are a popular choice mostly by women. Which it appears to be an innocent symbol, its real significance is based around fertility.

The cherry, which is rich in color, as well as in juicy inconsistency, relates directly to the life-giving power of women. It is said that they resemble the fullness and color of the lips of a woman, which is a very alluring of the form of a female.

As we already mentioned, some of the symbolism that cherries often represent are fertility, femininity, as well as desire. They also vary according to whether the cherry is on the tree or was plucked from the tree. A tattoo that depicts a cherry still on the tree is said to represent the innocence and purity of a woman. It is a symbol of virginity, purity, as well as innocence.