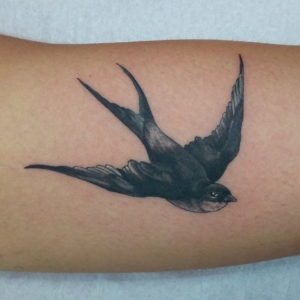 words that cannot be used interchangeably. Swallow tattoo is considered a traditional old-school design that symbolizes enduring love that first appeared on sailors during the World Wars.

Because swallows are known to always return home to San Juan Capistrano each year without fail, it was believed that sailors with a swallow tattoo would always return to their homes and families as well. Since they never fly too far from home, the sight of a swallow by a sailor was a symbol of hope; it meant they were close to land.

It was believed that if a sailor dies at sea, a swallow will carry his spirit to heaven. And, for instance, if a sailor had a friend who passed away, he may get a tattoo of a swallow with a dagger through its breast. Furthermore, swallows represent an enduring symbol of love and loyalty, as swallows are monogamous creatures and only choose one partner and will mate with them for life.

The tattoo of a swallow has a whole range of meanings. Among the most common swallow symbolism are:

The symbolism of the Swallow and Meaning of Tattoo designs

The symbolic meaning of a swallow tattoo depends on the design of the tattoo.

How do Swallow and Sparrow Tattoos Differ?

Both the swallow and the sparrow can represent freedom, undying love, or commitment to one person or loyalty. Still, the sparrow tattoo traditionally represented the mafia and is generally worn on the arm. The swallow has a forked tail with long curved wings and is usually portrayed in shades of blue or green, while the sparrow is a plump, brown bird with a short rather stout tail.

The best body position for a swallow tattoo depends on the size of the tattoo and whether you desire to show off your tattoo to the world. Small swallow tattoos can be placed on the wrist, hand, foot, or shoulder while larger tattoos are better suited for the chest or back. For those men who desire to announce their fighting prowess, the tattoo is best placed on the back of the hand or fist.

Reasons to Choose a Swallow Tattoo

Swallow tattoos are a perfect choice for both men and women and can symbolize triumph, love, and devotion, or rebirth. As such, they give off a positive air and are likely to be viewed by others as uplifting and beautiful. These tattoos are typically tasteful and are readily accepted by the general public. Swallow tattoos representing fighting prowess may be considered less positively and may hinder work and business opportunities in some social settings.