Also known as the mountain lion, panther, puma, or catamount, the cougar is the largest carnivore in North America.  It has the ability to hunt animals, which are three to four times its size.

Known by any possible name from the above mentioned, this animal is an elusive member of the cat family found largely in North America, and it is admired for its swiftness, strength, stealth, as well as intelligence, but also for the devoted attention which it pays to its young. When it is haunting, it instinctively attacks the most vulnerable spot of its pray, grabbing its victim by the throat if it can, by the spine, if it cannot. Just with one bite, it can kill the pray. 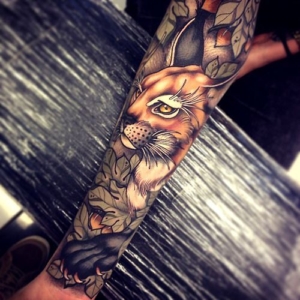 As we already mentioned, the cougar is the largest cay in North America. They are both solitary, as well as territorial, not to mention that they are excellent hunters. These animals will sit for hours just watching their prey, waiting to attack it at the right time.

Cougars are good mothers too, and they represent power, intuition, feminine, as well as strength. They also represent leadership, as well as taking charge of one’s life and the circumstances in the most effective way.

Cougars will teach us decisiveness, and imparts resolve, such as the great hunter preserving, as well as waiting for the perfect time to strike. However, they can be quite easily threatened, and thus quick to attack. This is the perfect example of their good mothering qualities: the females who have children are very protective, as well as quick to lash out when they feel that their offspring are in some danger.

“Take a breath and balance yourself. Cougar brings you the ability to focus your intentions and strength. Use your powers wisely.”- Unknown

Generally, if cougar symbolism has to come into your life, then it should be considered as you are coming into your power. It means that you should take charge of the situation and show your strength. The meaning of this animal lets you know that you have to leap into all of the opportunities which come on your way. Hence, you should use the power of your intentions and be quite clear about where you are going.

The symbolism of the animal also asks us to balance our intentions, as well as be clear with where we are going. Alternatively, it also lets us know that we have to use our leadership skills without using our ego. In other words, cougar meaning will remind us that we have to lead by example instead of forcing others to follow.

Also, shy, elusive, withdraw, as well as territorial, the cougar is an obvious symbol for those that value their independence.

When it comes to symbolism, this animal sometimes functions in a similar way as the jaguar in Mesoamerican cultures, such as a totemic animal, an animal which serves as an emblem for a clan or family, or even as a mythic ancestor.

These types of powerful animals are a frequent symbol of traditional shamans. The helper animal can appear in a vision to initiate and remain a special spiritual companion for the rest of his life.

Powerful, as well as decisive, this mighty cat was adopted by the Native American tribes as a sign of leadership.

The cunning of the cougar, its keen sense of smell and sight, as well as its knowledge of the habits of some other animals, was an inspiration for ancient hunters. Sometimes, carvings of the animal were taken on the hunt. For some Native American people, the cougar was the symbol of intuition for a long time as it possesses superior intelligence and knowledge, together with its power, as well as agility, that made it the chosen messenger between humans and the higher spirits.

Some tribes in America even regarded this animal as the protectors of the Universe. North, which is the most important of the four cardinal directions, took the cougar as its guardian.

As a powerful animal totem or in tattoo art, the animal represents balanced leadership – the ability to lead without using any force. Nurturing as a mother, but still potent as a hunter, this is a rare animal that combined power, as well as protectiveness or survival and strength.

Cougars are big cats, and they have great skills. Another thing that they symbolize is courage. This goes in line with its association with the Sun, as well as the solar vibrancy in some cultures.

The cougar tattoo can be a symbol of action, nobility, patience, decision, leadership, guardianship, protection, self-assurance, silence, and a lot more.

The cougar is an animal that inspires a lot of people to get a tattoo of it, not only because of its great symbolism but also because it is a beautiful and big animal from the outside. There are plenty of designs, or even some combinations with some other animals, or even with some objects, which make a good piece of body art.

However, remember that your tattoo will always symbolize what you want to and not what symbolism or meaning is applied to you.