Tattoos are the most common versatile body artwork. They can take any form, style, design, or symbol. For instance, there are many tattoos that can be quite elegant. Moreover, there are those that have very specific symbolism and meanings. There are even the ones who aren’t so common but also have special meanings. There are popular tattoo designs that every tattoo lover simply adores. Animals belong among those tattoos, because, let’s admit it, animals are charming creatures. Furthermore, there are many domestic animals, like cats and dogs, who act like real friends. However, there are also wide animals, overloaded with cuteness, but still symbolizing power and strength. One such animal is the lion. We all know that the lion is the king of the jungle and that it is a ferocious and fearless animal. Its abilities and strengths make it a common option for a beautiful tattoo design. 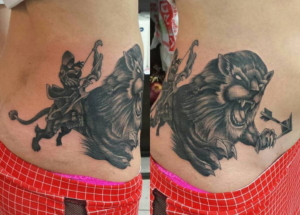 Lion tattoo designs may vary depending on the person that wears them. Usually, they are common among men, but women also adore them. Like all animal tattoos, lion tattoos will represent the traits and attributes of this animal.

The lion is the species belonging to the family Felidae. It is a muscular and deep-chest cat with a short and rounded head. It has reduced neck and round ears, together with a hairy tuft at the end of its tail. The lion is sexually dimorphic; the males are significantly larger than the females. Their weight typically ranges from 150 to 250kg, while for females, it is from 120 to 182kg.

The males have a prominent mane, which is also the most recognizable feature of the species. A lion pride consists of several adult males, related females, as well as cubs. Groups of lionesses typically hunt together, preying mostly on large ungulates. The species is an apex and keystone predator, even though they scavenge when opportunities happen. Some lions were known to hunt humans, even though the species typically doesn’t.

Typically, these animals inhabit savannas and grasslands but are absent in dense forests. Often, they are more diurnal than other big cats. However, when persecuted, they adapt to being active at night, and also at twilight. Lion populations are untenable outside of designated protected areas. Though the cause of decline isn’t fully understood, habitat loss and conflicts with humans are the most significant causes of concern.

The lion, one of the most widely recognized animal symbols in human culture, was extensively present in painting and sculptures. It was also present on national flags, as well as contemporary films and literature. Moreover, it is quite common in tattoo artwork too.

People usually call the lion the “King of the Beasts,” and this title is an apt one for its role in symbolism too. The lion design projects a lot of the same symbolic qualities as the animal does in nature. Such qualities are power, energy, courage, and vitality.

A favorite symbol of sovereigns and also of the gods, the lion finds its uses as a metaphor for almost every type of ruler. These rulers include Buddha, Jesus, and Krishna. In tattoo art, the lion is frequently depicted quite naturally. Sometimes, artists portray it simply with its distinctive head and mane, or they present it in an African savanna environment.

There are various meanings and beliefs that the lion has an association with, and some of them are:

Although lion tattoo designs aren’t mainstream, they are very popular among tattoo lovers. Because of the detailed work and needed shading, most of them are larger tattoos. These designs usually portray the whole lion or just the head. In some cases, the lion has a crown, as it is the king.