One tattoo design that you may consider unique and attractive is the panther tattoo. Both men and women wear this beautiful tattoo design. Just like all animal tattoos, this one represents the traits and characteristics of the panther. 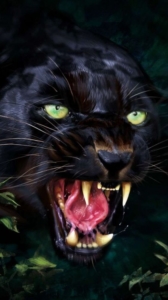 The panther is a member of both the leopard and puma families. It is a predatory animal, found throughout the Near East and in parts of North Africa. Panthers are mostly known for their savage cunning. In China, people consider the black one particularly dangerous.

Because of their characteristics in the animal kingdom, people associate them with superior courage, fighting agility, and strength in the tattoo world. The panther is a majestic creature in the wild. More the reason, this mysterious animal became even popular as a design for skin art nowadays.

Left along in its natural habitat, the panther is basically a stalker. It works behind the scenes to capture the pray or to avoid confrontation with some larger animals. The panther is carefully going to track the movements of its prey. After that, it will prowl and ambush its hunt in a blind-side attack.

Black panthers are not panthers at all. They are, in fact, leopards or jaguars with black coats. Black panthers are usually found in the denser forests in the regions of Asia and Africa. Both types of big cats are hunters that prey on mammals, fish, birds, and reptiles. They live up to 12 years in the wild and at least 20 years in captivity.

Black panthers have black base coats with black rosettes that are hard to see. They have small, rounded ears, powerful legs, and strong jaws. Adult black panthers usually weigh between 66 and 176 pounds. Also, they are between seven to ten feet long from head to tail. They are adept swimmers, particularly the ones that are stronger. They excel at climbing and leaping as well.

Black panthers only spend time with other leopards and jaguars to mate or care for their offspring. They communicate with others by vocalizing. Both species of black panthers are still present in the dense forests throughout much of their historical range. However, deforestation is steadily contributing to declining populations for this animal in general. The exact number of the population of this animal was still not determined.

Panthers are mysterious creatures that stalk the depths of the thick jungle undergrowth. They drive fear into the hearts of every single being that they encounter. The panther is not just an emblem of sophistication and quiet power, but it is the symbol of beauty, motherhood, and femininity.

Just like most of the tattoos of animals, panther tattoo meanings find their basis on the personal characteristics and traits of this animal. The panther is a skilled, powerful, and fierce animal, the top predator in the jungle. Even though it is aggressive, it is also a fiercely caring and loving parent. If needed, the mother panther is going to risk her life to defend her young.

The panther has many different symbolic meanings in the tattoo world, and some of the most common are:

Interestingly, the panther is a solitary creature. It prefers its own company over the company of anyone else. Outside of a mother raising her cubs, panthers live, evolve, and hunt alone. Living in this way causes unorthodox insights, and brings one closer to understanding different precious secrets of life.

Many people consider the panther the symbol of protection. Many South American myths identify the panther as the guardian of spiritual worlds. In the wild, panthers hunt during dusk and dawn. These are powerful moments in time among ancient cultures. They are moments of infinite potential as well.

Panther tattoos are very common nowadays, partly because of their symbolism, and partly because of their beauty. It is incongruous that the crawling form may have been adapted from a 1934 children’s book on mythology by old-time Milwaukee tattoo artist Amund Dietzel. Trendy design in its day, the panther currently enjoys a bit of resurgence in popularity.

There are numerous people who have a very deep connection to this mystical animal. The panther represents a magical creature that is perfectly representing the deeper aspect of magic. One of the reasons this tattoo keeps growing in popularity as more people recognize their connection to this animal.

Panthers are mysterious and extravagant animals. So, if you want to get a new tattoo, take into consideration this attractive tattoo design. You will not make a mistake, believe us.