Diving is a sport that includes jumping or falling into the water from a springboard or platform, often while performing acrobatics. Diving is an internationally recognized sport that forms part of the Olympic Games. Additionally to this, unstructured, as well as non-competitive diving is a recreational pastime.

Diving is definitely one of the most famous Olympic sports with spectators. Competitors possess a lot of the same characteristics as dancers and gymnasts, including flexibility, strength, kinaesthetic judgment, and air awareness. Some professional divers have been originally gymnasts or dancers, as both these sports have some similar characteristics to diving.

Even though diving has been a popular pastime all over the world since ancient times, the first modern diving competitions were held in England, in the 1880s. The exact origins of this sport are still not clear, although it is probably from the act of diving at the beginning of swimming races. 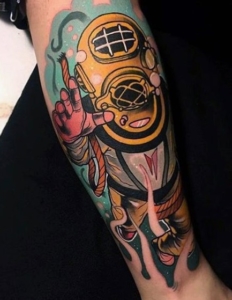 There is one thing that is related to this sport, and that is the diving symbol, the dive flag, or diver down flag, which has a specific purpose. Let’s read below and find out what its purpose is and something about its use in tattoo art.

A diver down flag, or even called scuba flag, is actually a flag that is utilized on the water in order to show that there is a diver under the water. There are actually two styles of the flag used nowadays. The internationally used, the code flag alpha, which is white and blue, is utilized to indicate that the vessel has a diver down, as well as that other vessels, have to keep well clear at slow speed. The second one, in North America, is conventionally red with a white stripe from the upper left corner to the lower right corner.

As we already mentioned, the aim of this flag is to warn any other boats to be careful and watch for the safety of the diver and also to alert the possibility of a collision with the dive boat which may not have the ability to maneuver out of the way.

The usage of the red flag with a white stripe, which has been created in 1956 by Navy veteran named Denzel James Dockery and popularized by Ted Nixon of US Divers, is required by law or regulation in different US states, Canada, as well as other countries, such as Italy. Often, some regulations require the divers to display the flag while diving and to stay within a specified distance of it when they are somewhere near the surface.

The world of a diver is fathoms below and apart from our world; diver’s territory is that of the uncharted and exhilarating.

The true realm of divers is the see, although they reluctantly make their home on land. For divers, there are several symbols that are as powerful as the diving flag, be it the North American red and white or international blue and white.

The diving flag is actually the message to the ones above the water that there is a diver under the water and to thus proceed with caution, and these flags are in a lot of ways as personal as the flag of origin of people.

The dive flag in tattoo artwork is usually combined with some other images of the oceans, such as blue water or fish. The white diagonal stripe in a field of red is a flag that is recognized in the United States, which means ‘diver down’ and we already mentioned a few times what its purpose is. While the diver down flag has a particular nautical meaning, it is often utilized as a tattoo symbol in order to let people know that the bearer of the tattoo is actually a diver.

Diving flag tattoos were seen on more than several shoulders, arms, or backs and are the unofficial mark of the man that abhors both the metaphorical and the literal shallows. The diving soul seeks discoveries and sensations, and is not content with only earthly matters; his diving flag is the sign to his fellow deep-sea spirits to join him in the depths.

A lot of people who wear this flag incorporates particular sea life or personalized totems and some that have survived some disasters at sea depict their flags in near shreds or, more terrifying still, shark bites. Despite the design ideas you choose, your diving flag will tell your tale in several words and the richest imagery.

The undersea world may be a foreign one for a lot of people, but for divers, it is a welcome return time. There is no place of entitlement and arrogance; humility and a sense of wonder are the intuitive tools of divers, Regardless of how deep you submerge yourself, your diving tattoo is going to accompany you to the fullest reaches and back. There is not much symbolism related to this tattoo design, but, as we already said, it can usually symbolize that the person that wears it is a diver or loves this sport.