In the world of tattoos, about 25% of all tattoos use animals. A lot of people relate to the behavioral and physical qualities of a specific animal. Such qualities can include beauty, power, temperament, strength, and a lot more. Animal tattoos become a way for us to express emotions, experiences, and instincts too. Even though what we associate with a specific animal has to do with symbolic meaning, many of them directly speak of ferocity and grace, purity or poison, swiftness or strength, etc. Animal symbolism is definitely among the most ancient of representational tattoo styles. Some animals have great historical or mythological associations, symbolism which is deeply rooted. Such symbolism also greatly varies from culture to culture, even for the same animal. Here, we will talk about the great white shark and its common meanings and symbolism in the world of tattoos and tattoo art.

The great white one, or Carcharodon carcharias, also has other names, such as the great white, white shark, or white pointer. It is a species of large mackerel shark that we can find in the coastal surface waters of all oceans. The great white shark is also specific for its size, with larger female individuals that grow to 6.1m in length. They also reach to 1905kg in weight at maturity. But most of them are smaller. The males measure 3.4 to 4.0m, while the females measure 4.6 to 4.9m on average. 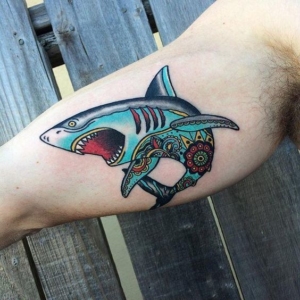 According to one study from 2014, the lifespan of these animals is 70 years or more, which is well above estimates from previously. This makes them one of the longest-lived cartilaginous fish known currently. According to that same study, the great male while takes about 26 years to reach sexual maturity. The females need 33 years to be prepared to produce offspring. The great white sharks can swim at speeds of more than 56km/h in depths of 1,200m.

This species of shark has no natural predators other than the killer whale but on rare occasions. This shark is arguably the largest known extant macro predatory fish in the world. It is one of the primary predators of marine mammals. Also, it preys upon a variety of other marine animals, which include seabirds and fish. It is the only surviving species of its genus Carcharodon. It has the responsibility for more recorded human bite incidents than any other sharks.

The species faces several ecological challenges, which resulted in international protection. The IUCN listed the great white one as vulnerable species too. Also, several national governments like the Australian protect it.

The great white shark is an unusually large, as well as aggressive species of shark. It is one which humans regard as particularly dangerous. This shark is present all over the world, whether the temperature of the water is warm enough to support them.

Tattoos of this species are quite notable for their depictions of the animal with open mouth while in the attack. Indeed, these sharks are especially famous for this feature, as they make unprovoked attacks on anything, even small boats.

Their coloring is usually gray or blue, with a white belly that gives them the name. They easily grow to lengths over thirty feet. In maritime, as well as naval tattoos, the sharks sometimes wear uniforms or spout periscopes.

Sharks usually get a bad reputation, which is quite understandable. Regardless of how much you love them, you will always be afraid of them.

Shark tattoos are as popular as you can expect. The most famous and feared fish is a regular motif in tattoo art, in every way imaginable. The powerful gray or blue and white body of the great white shark is what often comes to mind when you think of a shark. As we already mentioned, this shark is famous for its imposing size, as well as razor-sharp teeth.

This shark, used in tattoos nowadays, can mean more than only an aggressive force or a fearlessness to pursue anything in life. Nowadays, this shark type can represent a go hard or go home attitude. Such people live their lives to the fullest and always move full-speed ahead.

When it comes to accomplishing their goals, the shark tattoo can represent taking no prisoners in a quest to get the prize at all costs. The shark is a passionate animal in its pursuits. This is something that appeals to the masses.

Some of the most common meanings of the great white tattoos are:

Generally said, they are the symbol of life, because, in their natural atmosphere, they remain in motion and alert, even when they sleep. So, because of this fact, they also become the symbol of the lust of life and hard work.

The great white shark tattoo will be an excellent one for you if you are an animal lover. However, think twice before you decide to get it.