The history of tattoo art and painting of the body is very similar to the history of humankind. Even the cave people are known to have drawn on their bodies, and cases of ritual body painting in Inca, Maya, and ancient Egyptians, tribes from Asia and South America. For example, in the time of ancient Greece, tattoos were a punishment, so slaves were generally tattooed. These days, tattoos are a growing fashion phenomenon. It is not essential if you like it or not; it’s a matter of taste, wish, and personal choices. However, there is always the question that arises why someone needs to decorate his skin with some painting or text for his entire life? When we talk about body art that depicts ancient civilizations and myths, Egyptian scarab tattoo art ranks high on the list of popular designs.

The scarab tattoo design is representative of a historical impression symbol of Ancient Egypt. Moreover, it is just another way to call a beetle a beetle. You’re probably asking yourself what a scarab is. We’re all familiar with these beetles like symbols in horror movies and stories alike. However, they weren’t just famous for being feared and gross in film, but they were also made to be decorations, and they have a great deal of historical significance.

Scarabs are considered to be impression seals and amulets in Ancient Egypt. Many of these ornaments have survived through the years, allowing historians and archaeologists to have information of past times.

Although we don’t know why scarab beetle amulets became exceptionally widespread in Ancient Egypt around 2000 BCE and kept their popularity throughout the times of pharaohs, during that period, the importance of scarabs changed multiple times. In the beginning, they started as amulets and accessories. There were times; these amulets were inscribed with a message, name, or administrative seal. Moreover, some scarabs were made for diplomatic or political purposes of honoring achievements.

By the time the New Kingdom arrived, heart scarabs were used as protection for mummies. Luckily for historians, large numbers of scarabs were created through the years, so many survived the test of time. Initially, the amulets were designed to be worn by the living. In the beginning, they were generally molded or carved out of Egyptian 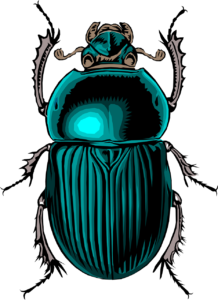 faience with degrees of realism. In most of cases, you would likely see the head, legs, and body of the scarab in these carvings. However, once they were carved, they would be colored either green or blue and then fired to make the colors and shape stand.

The symbolism of the scarab as a tattoo:

The scarab tattoo represents different characteristics depending on the culture. In the case of the Egyptian religion, Ra, the God of the Sun, was thought to roll the sun across the sky every day. By doing that, nature’s creatures would grow. We can see the similarity with the dung beetles in the Scarabaeidae family. These are a type of beetles that roll dung into a ball, so they have food to eat and as something to lay their eggs in.

By doing that, when the larvae hatch, they will be surrounded by food. This type of scarab represents rebirth and the cycle of life. Khepri is known as the Egyptian God of creation and the movement of the sun. It was believed that Khepri was involved in the movement of the sun and rolled the sun across the sky every morning. Then after sunset, he would walk the sun through the other world until he came back in the morning.

There was a close connection between the scarab and Khepri, who was often depicted with the head of a scarab. Being familiar with this, people with the scarab tattoo are generally doing so with the idea of Ancient Egypt in mind. By doing so, this tattoo symbolizes rebirth and growth, and with every new day, the previous day is left behind in history. We all get a chance to start fresh in the morning. Apart from ancient depictions of this endless cycle, the scarab could also be found in the form of jewelry, as an amulet or talisman, and was sometimes shown with the spreading wings or hawks. In this sense, the scarab stands not only for the hope of resurrection but also for protection from evil.

The Heart Scarab was often used in many funeral proceedings. Scarabs had transformed from being merely accessory pieces to pieces that guided the dead through the afterlife. There were two ways how the heart scarabs were used for the dead. First of all, when the soul made the journey to the Hall of Judgement, the heart was weighed, and if it weighed less than the feather of Ma’at, the soul would be taken by Ammit.

The Egyptians were looking out for their deceased with the Heart Scarab because it was used as a replacement for the heart if it wasn’t heavy enough. The other way the scarab protected the dead while taking the journey through the afterlife was by holding the answers to the questions asked by the gods of the underworld.

According to the Egyptian Book of the Dead, it is said that when the soul prepares for final judgment, the gods of the underworld will ask a series of questions that require specific answers. Because many people in that time were illiterate, the priest couldn’t even set a scroll in the tomb with all the questions and answers. To solve this issue, the priest would read the questions and answers to a scarab. Only then was it killed, mummified, and then stuck in the ear of the deceased.

In this way, the soul would have all the questions and answers prepared for the final test. From this, we can see the scarab symbol was used from the beginning of life through the end. The scarab tattoo may represent several stages of life and death, depending on the person with the tattoo. In the process of rebirth and protection, the scarab is one of the more essential symbols to ever come out of Egypt, which makes it a popular tattoo choice.

Although most of us think that a simple beetle is not that important in a symbolic sense, we can see that it has a much deeper symbolical meaning than we might think. Beetle tattoo designs can surely be placed everywhere because of its oval shape and characteristic appearance. They can vary from smaller tattoos to bigger ones that take much more space. When you decide to get a beetle tattoo, you need to make sure you inform yourself about the symbolism behind this tattoo and what it means to have a beetle tattoo on your body. The beetle or scarab can be a very creative idea for a tattoo, both in color and in black and white, so you can discuss with your tattoo artist who designs you want to have on your body. You only need to be sure; it captures something special for you and doesn’t just get something because it is currently in fashion.