The Beetle comes in a variety of sizes and colors, making them the perfect accessories for the caveman, a trend that is still alive and well-known today. These variations are used to great advantage in tattoo art. It is the deep lustrous quality of their colors, which is emphasized in tattoos, sometimes with wings extended to reveal a differing color beneath.

Beetles have also caught the attention and prayers of people that seek divine intervention. By far, the most famous Beetle to grace the surface of religious artifacts in the scarab beetle. It is one of the most famous of all Egyptian designs. In the Egyptian culture, the scarab beetle is thought to represent the Sun God, and the way they rolled their dung ball across the hot desert sands was said to be a cosmic reenactment of the ancient Sun God, Atum, pushing the sun across the vast sky. 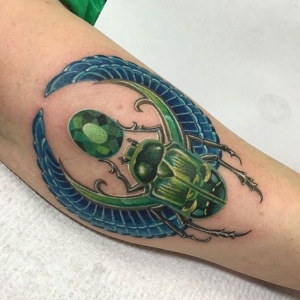 Scarab beetles, as well as their tomb walls, were filled with images of the insect in its spiritual quest to ‘push the Sun across the sky.” Bejeweled scarabs were wrapped in the mummified bandages of the pharaoh in the belief that this would help him to reawaken in the land of the Dead, as well as start his journey towards resurrection.

In Japan, beetles are kept as pets. Prehistoric men of 10,000 to 20,000 years ago had beetle-shaped pendants. Even though we may never know what symbolism was intended by early peoples, we know that for some traditional cultures, the Beetle – which is capable of a fight and of burrowing into the ground – was associated with food, as well as with shamanism.

The types of beetles on the planet Earth are a lot, as the amount of sand on a beach. But, for each variety of this creepy crawlies, there is also a plethora of symbolic meanings attached. Some of them include: