Filipinos are known as very prideful people. According to them, their country is one of the most beautiful and culturally rich countries in the world. Of course, if you take a look at all the different symbols and stories from Filipino culture, you have to agree with their claim. When people what to show how proud there are of the country they come from, they are doing that in different ways. For the Filipinos, this includes wearing clothes that are native to their land, wear the colors of their country, or even get some jewelry with some symbol of the Philippines on it. The most way is through getting a Filipino tattoo.

The simplest meaning that lies behind Filipino tattoos is the sense of pride and culture for a country that you have a connection with. When people want to show respect for the country they come from, they can do a lot of things, but getting a tattoo is perhaps one of the most serious expressions of nationalism that one can take.

If you want a Filipino tattoo that is strong and very common, then the Filipino flag is the one you need. This is because the flag is the simplest way through which you can show your love for the country. The Filipino flag is made of silk and has a five-pointed yellow star at each angle of the triangle that presses up against the left part of the flag. The sun symbolizes freedom, while the sunburst is representative of the first eight provinces that stood up and took part against Spain. The three stars signify Mindanao, Visayas, and Luzon, which are the three island groups of the Philippines. The white triangle is representative of equality, while the blue stripe stands for justice, truth, and peace. The red line symbolizes courage and patriotism.

The name of the Filipino national anthem is Lupang Hinirang. This anthem was composed by Julian Felipe, and it was first played during the proclamation of Philippine Independence on June 12, 1898. José Palma is also known as the writer of a poem entitled Filipinas, and some of the lyrics for Lupang Hinirang were taken from this poem. This means that the person wearing the tattoo with the lyrics of Lupang Hinirang tattooed want to show ultimate respect for the Philippines.

The Filipinos have their national flower known as Sampaguita. This is a beautiful white flower that is also recognized as the Arabian Jasmine. This flower signifies simplicity, strength, modesty, and purity. Therefore, the symbolism of the Sampaguita tattoo is the same as these traits, as well as being a symbol of the Philippines. 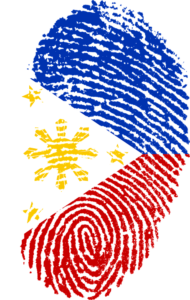 Since the Narra tree is the national tree of the Philippines, this is another popular subject to get as a Filipino tattoo. This tree is also recognized as the rosewood, which in 1934 was officially named the national tree by Governor-General Frank Murphy. Because this is such a big and strong tree, to have this tattoo is very symbolic of the Filipino spirit.

Filipinos have their national bird known as Pithecophaga jefferyi or just known as the “Philippine Eagle.” President Ferdinand Marcos made this bird the symbol of the Philippines via Proclamation No. 1732. This unique looking eagle is a depiction of the Filipino people, and it also looks great inked on the body.

Another great symbol of the Filipino nation and culture is the Philippine pearl, which in 1996 was named as the national gem by former President Fidel V. Ramos. This image might be hard to depict in a tattoo since all the pearls look alike, but we typically see this tattoo done with other symbols of Filipino culture.

Arnis is known to be the national sport of the Philippines. This sport includes a martial art whose origins are still unverified due to the lack of documentation. It is also recognized as Eskrima and Kali, and they use bare hands, sticks/batons, or bladed weapons. In 2009, Arnis became a national representation when it was signed into law.

Dr. Jose Rizal is recognized as the national hero and has been seen tattooed in portrait fashion on the body of numerous Filipino people. Various Filipino scholars will dispute about who the national hero is of this country as many people had huge impacts on the nation. Still, Rizal was the man who led the local Filipino people to rise and revolt against the Spanish. A great deal of his fighting was done through his writing since he was a poet. This was his way of beginning the revolution, while others picked up arms and went through a bloodier way to freedom.

The national plant of the Philippines is the anahaw, which is also known as the round leaf fountain palm. The anahaw is not part of the national symbols of the country, but it is said to stand for the Philippines. You can see these leaves in the countryside as material for roofing.

If you are interested in Filipino history and culture, you find this nation as a real fascination, or you want to show respect for this prideful nation. You are the perfect candidate for one of the Filipino tattoos mentioned above. These are the perfect tattoos for any person who has Filipino roots and wants to represent that pridefully.