Home
Tattoo Meanings
Gaara Tattoo Art: The Story And Symbolism Behind The Design

Naruto is the manga and anime television series, and Gaara is a fictional character part of it. Naruto dates back as far as 1997. These series were very popular in the world of anime. This fantasy, courageous story revolves around the boy Naruto and his friends and allies. 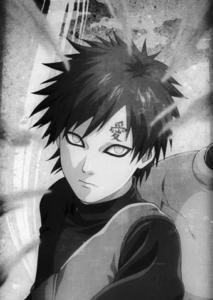 In the show, Gaara is one of the fan favorites. At first, Gaara was the antagonist of the show. This is because his father wanted a child that he can use as a weapon to re-establish their village. In his entire life, other inhabitants saw him as a demon and outcast of the village. Gaara grew in a deep hatred for his enemies by persistently looking at him as a monster. Just like him, Naruto was also a dangerous person in his village. Gaara became friends with Naruto and then started to change his viewpoint. After that, he was able to control his rage and hatred more.

Yashamaru is Gaara’s uncle and the one who raised him. According to Gaara, he raised him because Gaara’s family and the other villagers were afraid of his powers. In his sixth year of life, his father gave an order to Yashamaru to assassinate him. For Gaara, Yashamaru was a father figure and the only person alive that was capable of loving and nurturing him. One night, an assassin came to Gaara but failed to kill him. Once the assassin was defeated and dying on the floor, Gaara realized that it was his uncle, Yashamaru. In his last moments, Yashamaru confessed to Gaara that he never did care about Gaara in the first place. He disliked Gaara because he held him responsible for the death of his sister, Gaara’s mother. For him, Gaara was a demon that fought only for himself.

This realization hit him hard. Now he knew that nobody has ever or ever will love him. Gaara was controlling the power of the sand. So he decided to brand himself on his forehead with the symbol ‘ai,’ which signifies love. The symbol of ‘a demon loving only himself’ was written all across his forehead. This is a significant part of his character. It’s the perfect illustration of a misunderstood, troubled youth. Youth who, under the right circumstances and proper attention and love, would not have turned out so cruel.

As already said, Gaara used his powers to control the sand to create a brand on his forehead. This brand symbolizes love and is a reminder that he is the ‘demon loving only himself.’ This so-called ‘brand’ on Gaara’s forehead gave the unique and creative idea of getting this symbol as a tattoo. Although originally, this design is on Gaara’s forehead, it doesn’t mean you should do the same. You should carefully examine examples of this tattoo and then choose the spot for it.

Once more, the symbol on his forehead translates to ‘love,’ so he is the ‘demon loving only himself.’ Fans of the show, especially Gaara, have replicated this piece as their very own. This tattoo design will always hold meaning. These designs are classically black. However, no matter whatever color you choose, it yet again holds the same meaning. You can ink it on the back of the neck, the forearm, or upper arm. You can even stretch it out as a larger image on the pectoral or chest.

Since Gaara’s symbol is above his eye, this is another popular tattoo design. Most fans choose to get just his eye and eyebrow, with the symbol above. This tattoo design is perfect if you want a real anime feel. Fans of the show will right away recognize this graphic and compliment you. The eye of Gaara can be either in black or red color. This gives it the effect that he is starting to morph into his One-Tailed beast form. A tattoo such as this looks perfect on the upper arm and even on the chest.

The image of Gaara himself is another popular and notable tattoo. You can never be wrong with a tattoo of Gaara in an action pose, ready to fight, perhaps one of his nemesis. Moreover, you can have him posing with his One-Tailed beast form, maybe with the face of the One-Tail blown up. A larger graphic can include Gaara standing in front, off to the side of the beast.

Getting this tattoo is the best way to respect your favorite character in the Naruto series. Fans of this anime and manga will compliment you for the choice. But the most important thing is to be sure that you want a tattoo of Gaara on the body. This is a specific design, and you’ll need the time and resources to do your research about the motif.