Home
Blog
Gypsy Tattoo Variations And The Meanings Behind These Designs

Gypsies are a number of ethnic groups that are popular in history due to their ways of living outside of conventional means. Having that in mind, there is no surprise at all that there are so many Gypsy tattoo designs that have a lot of meanings behind them. Most of these tattoos are female, but it is considered a unisex tattoo thanks to the many meanings that can be given to these tattoo designs.

Gypsies come from India, but later on, they dispersed into Western Asia and Europe. The roots of the word ‘Gypsy’ are part of dozens of languages. According to this, you can find Gypsy tattoos on people all over the world since they have special meanings pretty much everywhere. The style of the designs and the meanings will be somewhat different depending on the origin of the owners and the type of Gypsy tattoo that they get.

Gypsies are also recognized as Romani people who have a rich history and dozens of sub-groups that boast heritage from almost all parts of Europe. Those people who have a Romani heritage and culture often decide to get Gypsy tattoos that portray iconic pictures from their family’s history. For instance, that can be a picture of a relative, or they could have several images of items or places that are significant to their families in some way. Most of the time, these tattoos are highly personal with hidden meanings.

Due to their nomadic way of living, the term Gypsy is often synonymous with the term traveler. If this is the case, people might decide to get a Gypsy tattoo only to represent their nomadic lifestyle. Even if people leave a different lifestyle than the nomadic, they can still get this tattoo to show that they like doing things their way, and they value their alone time. It is essential to know that you don’t need to have Gypsy blood to own this kind of tattoo.

The mixture of nomadic histories is the reason why we recognize gypsies as free spirits who enjoy traveling, unrestricted by the conventions of mass society. A lot of people are still into the hippy lifestyle, and there is no better way to represent that than through a Gypsy tattoo. When outsiders see the Gypsy tattoo, they immediately think that the person wearing the tattoo lives his life according to his own rules. Thanks to the wandering and roaming way of life, the Gypsy received some adventurous qualities that are both fearless and bold.

The tattoo design that includes an image of a Gypsy typically involves many patterns and colors to imply the chaos and adaptability of the lifestyle. The most common portrait is that of a woman wearing a headdress of some kind, which can incorporate flowers or beads of several different colors. Frequently, this woman also has a piece of big jewelry on, such as necklaces and big hooped earrings.

Since these people have Indian roots, the hair and features of Gypsies are frequently quite dark, portraying their ancient heritage. However, that doesn’t mean that the Gypsy in the tattoo designs has to be with dark skin, especially since people often decide to have them with makeup on the face or they don’t fill in the face at all. The style of hair and the facial features will typically make it clear where the person is from.

Gypsies are considered as confident people, and that allows them to stay on the outskirts of traditional expectations. This is why they are characterized as a wild, disobedient spirit with a restlessness that is tamed only by an unrestrained life.

Literature often portrays the Gypsies as negative people, often criminals, and selfish because of their disrespect for traditional customs. Even though the majority of people would not want to use this Gypsy tattoo meaning, some will get this tattoo, especially to show that they are to be feared.

The Gypsy soul is untamed and nomadic with strong bonds to their clan but stern freedom. This is why the Gypsy tattoo designs can be the perfect choice for someone with Gypsy roots, which is very proud of their heritage. 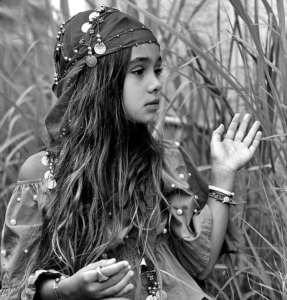 The fact that there is no official Romani state doesn’t prevent these people from having their slogans and national symbols. The Roma slogan is “Opre Roma,” which can be translated as “Arise Roma.” People who belong to this community recognize this slogan as their own, and that is why it can be handled as a tattoo design.

The international conference named “United Roma of Europe” in 1933 adopted a Roman flag. The original flag can be recognized by its two horizontal bars, the top one being blue with a green bar on the bottom. Blue is used as a symbol of eternal spiritual values and the sky, while the green color was a symbol of eternal terrestrial values, fertility, and green fields.

In 1971, the flag was improved with the adding of the Chakra. This is another popular tattoo. This Chakra stands for the one from the Hindu religion, and it was chosen because of the Romani Indian heritage. The look of the Chakra is like the one of a wheel that is said to be a representation of the traveling family of Roma.