Tattoos are not only related to art, but also with religion. One of the religions which are closely connected with tattoo art is Buddhism, which is an ancient religion that has its roots in some countries and cultures all over the world. This religion is based on the teachings and principals laid down by Buddha, who is the religious leader of Buddhism. Here, we are going to talk about the Dharmachakra, or better known as the Wheel of Dharma or simply Dharma wheel, which is one of the richest Buddhist symbols which appear in blackwork tattoos. The Dharma wheel has represented the teachings and walking of Buddha on the path to enlightenment, since the time of early Buddhism. Also, it is connected to the Four Noble Truth and the Noble Eightfold Path.

Buddha tattoos are meant to replicate the teachings of this great spiritual leader and mentor. The tattoos are not necessarily preferred by only the followers of Buddhism but also a large number of people that believe in the ultimate truth of life, that one needs to overcome all the sufferings, as well as temptations of life, in order to reach the stage of salvation or nirvana.

History of the Dharma wheel.

As we already mentioned, the Dharmachakra or Dharma wheel is one of the oldest and most important symbols in Buddhism. The Dharma wheel represents the teachings of Buddha. It represents Dharma, which, according to the Buddhist religion, is the pathway to reach nirvana or a peaceful state of mind.

It signifies teachings from not only Buddhism but also Hinduism and Jainism. Dharma wheel means Wheel of Law. The Dharma wheel has a varying number of spokes, most commonly eight. Dharma wheel may also be seen in any color, but it is often in gold. The center of the Wheel has three shapes swirling together, often they look like a Yin-Yang symbol, but it may be a wheel or another circle.

The Wheel is also considered the main attribute of the Vedic god of preservation, the god Vishnu. Madhavan and Parpola note Chakra sign frequently appears in Indus Valley civilization, on a few seals. Interestingly, in a sequence of ten signs on the Dholavira signboard, four are the chakra.

The Dharma wheel is one of the Asta Mangala of Buddhism. It is also one of the oldest and richest Buddhist symbols which are found in Indian art, appearing with the first surviving post-Indus Valley Civilization Indian iconography in the time of the Buddhist king Ashoka.

The Buddha was said to have set the Dharma wheel in motion when he delivered his first sermon. The Wheel itself portrays ideas about the cycle of samsara and the Noble Eightfold Path.

Buddhism has adopted the Dharma wheel as the main symbol of the chakravartin ‘wheel-turner,’ the ideal kind or universal monarch, symbolizing the ability to cut through all of the illusions and obstacles. According to some sources, the symbolism of ‘the wheel of the law’ and the order of nature is visible in the Tibetan prayer wheels. The moving wheels symbolize the movement of cosmic order.

The Dharma wheel in Buddhism symbolizes a lot of things. Still, maybe the most common one is the concept of Dharma, the basic principle of cosmic existence and order and its cyclical nature of rebirth into successive reincarnations.

Spokes of the Dharma wheel sometimes number four, and they symbolize four moments in the life of the Buddha, but more typically, they appear with eight spokes, which symbolize the Noble Eightfold Path, a doctrine taught by Buddha.

As we said, there is not a single meaning connected with the 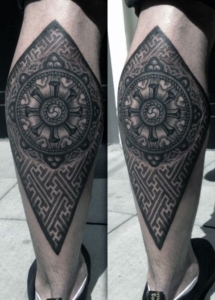 Wheel; it can be interpreted in a lot of different ways. The teachings of Buddha are known as Dharma. The circle shape of the Wheel is a symbol of flawlessness of the Dharma, which is the teaching of Buddha. The rim of the wheel stands for the capacity to concentrate and meditate, which further helps to hold all the teachings together.

Simply said, it explains the process of birth and rebirth. For all the problems an individual may have to go through, Buddha provides a solution through meditation to end all the suffering.

Meditative divinity is strikingly encapsulated by the captivatingly understated details of the Dharma wheel too. This exceptionally exquisite symbol is the pathway to supreme spirituality that incorporates great meaning and symbolism.

The Dharma wheel tattoo borrows from a lot of Buddhist forms, and the center of the Wheel can be a lotus, or simply, as usual, a belly button.

This supremely grand symbol carries ancient wisdom that attracts a lot of tattoo lovers. These tattoos would be perfect for Buddhists who see reality as a temporal state to be overcome via meditation and objective truths. It is said to be the peak achievement of existence, which is dubbed as nirvana.

This tattoo design may appear on its own or combined with other objects and things, and it only depends on you what it will symbolize.