The first thing that most people think of when they hear about tattoos is bikers, gangs, and motorcycle riders. When we think or talk about motorcycles, only one brand name exemplifies the riding spirit, and that name is Harley-Davidson.

Basically, the brand has become the symbol of motorcycle riders of every age, gender, nationality, and color. Those people that choose to go that extra mile and get Harley-Davidson tattoos usually own bikes themselves. Also, it may mean that they are planning to get one soon. 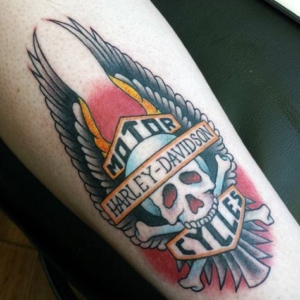 Harley-Davidson tattoo designs are easy to spot in crowds. However, they hold some different meanings which make them one-of-a-kind.

The company also survived ownership and subsidiary arrangements, periods of poor economic health, and product quality. Moreover, it survived the intense global competition, becoming one of the largest motorcycle manufacturers in the world. Also, it became an iconic brand that people widely knew for its loyal following. There are owner events and clubs around the world, together with a company-sponsored and brand-focused museum.

Harley-Davidson is famous for a style of customization that gave rise to the chopper motorcycle style. Traditionally, the company marketed heavyweight, air-cooled cruiser motorcycles with engine displacements bigger than 700 cm³. However, it has broadened its offering to include more contemporary VRSC and middle-weight Street platforms.

The company markets the products around the world, and licenses and markets merchandise under the Harley-Davidson brand. Among them are apparel, home décor, as well as ornaments, accessories, scale figures of the motorcycles, toys, etc. Moreover, there are video games that find their basis on its motorcycle line and the community.

Everything started in 1901. The 20-year-old William S. Harley came up with plans for a small engine. During the following two years, he, together with Arthur Davidson, a childhood friend, worked on their motor-bicycle. They finished it in 1903 with the help of Walter Davidson, the brother of Arthur. However, they found it unable to climb the hills around Milwaukee without pedal assistance. But, it was a valuable learning experiment. They started working on a new and improved machine. In 1906, Harley and the Davidson brothers built their first factory. By 1913, the authorities demolished the yellow brick factory. However, they built a new five-story structure on the site.

The Harley-Davidson motorcycle company and its bar-and-shield logo became American icons for independence and free-spiritedness. Far from being strictly a biker tattoo, the bar-and-shield, sometimes with an eagle, is synonymous with Harley riders. These riders are from all over the world; however, most of them are particularly from the U.S.

If you are sporting a Harley-Davidson tattoo, you probably own a Harley. While you can incorporate the name into any graphic arrangement of eagle, wheels, or wings, the standard bar-and-shield logo, appearing in 1910, is still defining a symbol of Harley-Davidson nowadays.

The logo depicts nothing in itself. However, it invokes a myth in which people sum up in the philosophy “Live to Ride, Ride to Live.” The way in which you can draw your Harley-Davidson tattoos may be as unique as the meanings behind them. Each design permits the wearer to promote their individual expression. Some even took things to the extreme. Whether getting flying wings, an actual hog, a giant eagle, or skulls, the underlying tone here is about freedom.

Getting out of the highway and opening up the bike is the expression of power, dominance, control, and freedom. Those that own a Harley are never going to settle for another brand. This devotion is part of the overall appeal. Many people get the tattoo design as a memorial or tribute to a fallen loved one who cherished these bikes.

The name itself finds its uses in tattoo designs. But, despite those two words, the tattoos will be all about friendship, loyalty, creative spirit, and always freedom. Those people that are willing to get a tattoo of the brand name of the motorcycle aren’t promoting the bikes. In fact, they are connecting to the spirit of riders that embraced this brand for over 100 years. Also, they want to say that they will keep doing that for as long as they can ride.