A few generations ago, a lot of tattoos were seen as potential gang tattoo – whether or not they were related to certain gangs. That is because tattooing has been relatively uncommon among ordinary people and the mainstream public, so having a tattoo almost automatically meant that you are in some way associated with some criminal activity.

In other words, although there are a lot of people who don’t have the skill to identify certain symbols, it was more or less taken for granted that tattoos were mostly connected to a criminal underworld.

Luckily nowadays, tattoos are very common, and they have lost that sort of association. However, this does not imply that gang tattoos have also disappeared. There are still a lot of tattoo designs that are specific to the different ethnic gangs which operate in some of the major cities. 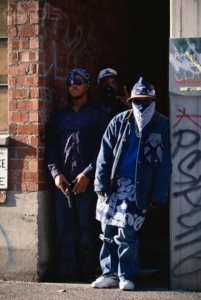 Gang and prison tattoo has the same basics with the traditional tribal tattoos. But hey do mix well with some modern decorative body art. They are designed to mark an individual as a member of a group and is an indication of status. One such tattoo design is the “Crips” tattoo, which comes from the gang with the same name.

The Crips are a gang that is based in the coastal regions of southern California. They have been founded in Los Angeles, California, in 1969, mainly by Raymond Washington and Stanley Williams. Once a unique alliance between two autonomous gangs, they are now a loosely connected network of individual ‘sets’ often engaged in open warfare with one another.

The Crips are one of the largest, as well as most violent associations of street gangs in the United States. With an estimated 30,000 or even 35,000 members in 2008, they were involved in murder, drug dealing, robberies, among some other crimes. Also, they have a long and bitter rivalry with the Bloods.

Stanley Tookie Williams met Raymond Lee Washington in 1969, and they decided to unite their gang members so they could battle other street gangs. Most of the members were aged 17.

By 1978, there were about 45 Crips gangs, called sets, and they operated around Los Angeles. They have been heavily involved in the production of PCP, amphetamines, and marijuana. On the 11th of March, 1979, Stanley Tookie Williams, who formed the group, was arrested for four murders, while on the 8th of August, the same year, the second creator, Raymond Washington, has been gunned down. However, despite the deaths of the leaders, the gang kept growing.

Despite the rise of the gangs in Los Angeles like the Crips as recently as the 1940s, the meaning of the origin of the name is still not known. According to the claiming of most of the sources, the name arose from the word ‘Cribs’ from the group “Baby Avenues” or “Avenue Cribs,” who took their name from an older gang called “The Avenues.” Nowadays, the Crips are a wide-spread gang around the nation.

You have probably seen a lot of tattoos that indicate the allegiance of a person to a group or a gang. However, what do gang tattoos mean? Whether they are full of color or they are rendered in stark black ink, those pictures hide some symbolism in their lines. If you are curious about their secret meanings, you can always search on the internet and find them.

As gangs grew in America in the 1920s, tattoo art was “must-have” for the leaders and soldiers also. Some similar prison tattoos, gang tattoo designs became a way for members to show allegiance to specific groups. Almost every gang which exists has some specific tattoos which are connected with them. So, the Crips gang has its tattoos as well.

The Crips have a lot of tattoos that are connected with them, and just a portion of them has to do with disrespecting their rival gang, the Bloods. For instance, number 211 on a Crip stand for ‘Blood Killer.’ The number 2 represents the ‘B’ in the alphabet, while the number 11 represents ‘K’ in the alphabet. The numbers “3 18 9 16” are spelling the word CRIP.

The “Crips” tattoo is a sign of acceptance done with Old English and Gothic lettering. A lot of those tattoos also have only the letter “C” incorporated into an acronym or part of the design.